The Lost Soul has its origin among the Damned former humans who have fallen from the mortal world, doomed to an unliving eternity as sin-branded slaves of Hell. The Damned are seemingly endless in number, their populations growing by the thousands with each rise of the black sun. For many, the torturous existence of crushing slave labor is all that awaits. The bodies of the Damned are brittle, and those who become broken in labor - their bodies ruined, dismembered, or otherwise incapable of servitude - are transported to the pits where their souls must be extracted for further use. Those fortunate enough to escape this process are what inevitably become Lost Souls; their spirits transmogrified into physical form. The Lost Soul knows only madness, its memory a haunted image of its former mortal life. These creatures live a fleeting existence, roaming mindlessly, seeking only that which grants them a final death.

True to its design in every game past, the Lost Soul appears as a flaming horned skull. The Lost Soul will drift around at random, emitting blue flames as they meander the landscape. These flames will turn red when they sight the Slayer. The horns have been shifted to face the back more when compared to the Doom (2016) design, more closely resembling their original counterparts.

Lost Souls can also be summoned via Pain Elementals. These Lost Souls will be spawned in an immediately aggressive state, charging the player almost instantly.

Fortunately, the Lost Soul is very fragile, able to be killed quite easily by most weapons. Notable weapons are the Combat Shotgun, which will repel the Lost Soul in the opposite direction and explode on contact with a wall or Demon. Their other critical weakness is the Ice Bomb, which will kill a Lost Soul instantly. 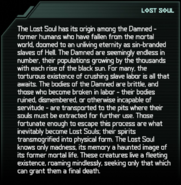 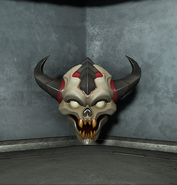 Lost Soul Collectable
Add a photo to this gallery

Retrieved from "https://doom.fandom.com/wiki/Lost_soul/Doom_Eternal?oldid=132031"
Community content is available under CC-BY-SA unless otherwise noted.