"For millennia we have survived. Made others sacrifice in the name of our prosperity - so that they may in turn find redemption. Who are you, a human, once a mortal, to defy our traditions?"
― Khan Maykr to the Doom Slayer before their fight [src]

The Khan Maykr or the Supreme Maykr, is the supreme ruler of the realm of Urdak and the leader of the Maykrs, a highly advanced ancient race of alien beings. She serves as the main antagonist of Doom Eternal.

The Khan Maykr is one of the many Khan Maykrs that is birthed by the Singularity, the collective Maykr consciousness, that is destiny-bound to lead the Maykr race until the next Khan is born. The Singularity, which contains the conscious soul-data of every major Maykr that has ever lived and died, processes and refines this data as a means of selective evolution. As hierarch of the conscious neural-matrix to which each Maykr is interconnected like a hivemind, it is physically impossible for a Maykr to refuse the collective order of shared consciousness and disobey a Khan. This system has functioned without error since the creation of Urdak, until the disappearance of The Father, the progenitor of the Maykr race, caused by a rogue Maykr known as the Seraphim. Without the Father, the Maykrs are incapable of creating a successor to the Khan lineage, allowing the current Khan Maykr to rule Urdak without limit.[1]

The Khan Maykr led her race in expanding their influence and dominion across the known universe. Among the races they converted to serve their cause are the Argenta of Argent D'Nur. Despite holding sway of a vast empire, the Khan Maykr had feared of her rule being threatened by a "chosen one" who would end the Maykrs.[2] To this end, the Khan Maykr took an element of the Dark Lord that was preserved by The Father in the mountains of Encremon and used it to power the Divinity Machine to test on the Sentinel warriors of Argent D'Nur to find and destroy this hidden threat.[3] The Argenta were falsely told to believe that the Divinity Machine was to cleanse them of "impurities" in which countless Sentinels were driven insane and their souls destroyed.[4][5] Unknown to the Khan Maykr, she was manipulated by the influence of the Dark Lord to unwittingly forge the downfall of her race.

During the reign of King Novik, an outsider known later as the Doom Slayer came to Argent D'Nur and was judged in the Coliseum. The Khan Maykr was piqued by the Slayer and his ravings about demons in which she had him brought before her and ordering her minions to learn his language, as she wanted to know more about the lands, creatures and a dark place unknown to the Queen and her caste.[6]

The coming of the Slayer soon led to the Maykrs' contact with the demonic legions of Hell, as they invaded Argent D'Nur and causing the outbreak of the Unholy Wars. The Khan Maykr was interested of the demons' Hell Essence and gave her blessings to the Order of the Deag to study the Essence. Eventually, their research discovered that the demonic energy has an unlimited potential to revolutionize military science and industrial healing, which include the prevention of Transfiguration that the Maykrs feared.[7] The Khan Maykr then commanded the Argenta to take the lands of Hell and harvest the Essence, as she has the Order of the Deag to construct vast factories on the Hellscape to gather Essence for further development that would combine the Wraiths' energy and Hell Essence into Argent Energy. The Khan Maykr was uneasy with the unforeseen rise of the Doom Slayer, who was blessed with greater powers by Samur Maykr using the Divinity Machine, an act that the Khan Maykr did not give him permission to do. However, the Khan Maykr saw an opportunity to benefit from the Slayer's endorsement among the indoctrinated masses and use him to pave the way to obtain more Essence.[8]

As the war against Hell waged on, the Khan Maykr later founded a suitable way of gaining more Essence. The Khan Maykr made a secret pact with the Dark Lord of the First Age of Hell: To harvest the flow of Argent Energy from Hell to Urdak, in return for granting demon-kind access to all worlds under her influence. The Khan Maykr justified the sacrifices of countless mortal souls as the only way to prolong the survival of her race. She and her converts helped the demons with the processing of mortal races into Argent Energy, using slave labor to construct the Soul Spires in Nekravol to accelerate the efficiency of Argent production as captives are tortured until no semblance of humanity remains within them, thus extracting the soul and leaving the victim's body to transform into demons.[9]

The Khan Maykr's insidious conspiracy is eventually discovered by the Night Sentinels and lead to a civil war on Argent D'Nur between those who remained indoctrinated and loyal to the Maykrs and the other opposed to the Maykrs.[10][11] The war ended with the opposition crushed by betrayal among the Night Sentinels' ranks as the Khan Maykr's enemies are left scattered in Hell where they fell against Hell's endless demonic horde. However, the only survivor of the Night Sentinels is the Doom Slayer, who remained surprisingly relentless and undefeatable against Hell.

After the destruction of the Well, an unlimited source of Argent Energy built from the souls of the Elemental Wraiths, the Khan Maykr sought to renew the supply of souls, leading her to orchestrate the Hell invasion of Earth, which she judged humanity unworthy and their world harvested into Argent Energy. She tasked the Hell Priests Deag Grav, Ranak, and Nilox to oversee the invasion. Her plan is soon opposed by the Doom Slayer, who was determined to quell the invasion by killing the Hell Priests and thus putting the Maykrs' future at risk. When the Slayer killed Nilox, the Khan Maykr teleported the two remaining priests to unknown locations and warning the Slayer to not interfere while claiming that the invasion is "humanity's chance to repent, to give service to the Maykrs," and reminding the Slayer's past role in helping the Maykrs discovering Hell's existence. But the Slayer ignored her words.

After the Slayer killed Ranak, the Khan Maykr moved Grav to Sentinel Prime before once again warning the Slayer, in the form of a transmission, that his interference will not disrupt her work. However, the Slayer soon managed to reach Sentinel Prime with the help of Dr. Samuel Hayden. The Khan Maykr repeatedly attempted to dissuade the Slayer, justifying her actions of continuing the flow of Argent Energy as a necessity to save her people at the cost of many lives. She also offered the Doom Slayer the chance to return to his original world and restore what the demons took from him in exchange for giving up his quest. The Slayer remained unswayed, however, going on to kill the final Hell Priest.

Angered by the Slayer's actions, the Khan Maykr attempted to stop the Slayer by remotely shutting down the Fortress of Doom and trapping him there. The Khan Maykr then resolved to continue her plans by resurrecting the Icon of Sin to devour Earth while claiming the Slayer to be at fault for forcing her hand and bringing about humanity's extinction. However, the Khan Maykr did not foresee the Slayer using the Crucible to restore the Fortress back to his control.

As the Khan Maykr prepared a ceremony to awaken the Icon of Sin in Urdak, the Slayer arrived at the ritual. The Khan Maykr initially remained unfazed by his presence, believing he could not stop the procession. To her horror, the Slayer used a special dagger given to him by the Betrayer to destroy the Icon's heart that retained the Icon's humanity and would have allowed the Khan Maykr to control the demon. With the Icon of Sin awakened in Urdak and freed from the Maykrs' control, this caused the seal blocking Urdak from Hell to be broken and allowed the demons to invade Urdak, bringing ruin to the once holy place and its people. The Khan Maykr confronted the Slayer, angered by what he had done, before battling him. She is eventually killed by the Doom Slayer. By her dying breath, she claimed that the Slayer's transgressions on Urdak would jeopardize all of creation. As she died, the Life Sphere on her chest ascended into the sky and detonated, creating a storm. Following her death, a mysterious voice could be heard, crying out in rage.

In combat, the Khan Maykr has six health bars and is protected by a shield that takes damage like a normal enemy. The shield will rapidly regenerate if it is left undamaged for a certain period of time. If her shield is destroyed, the Slayer's Blood Punch meter will be fully charged, and she will be stunned and rendered vulnerable for a few seconds (signified by her turning green). During this vulnerable period, the Slayer must use the Meat Hook to get up close and Blood Punch the Khan (if they can manage it, the Slayer can use other means to get close) to destroy one of her health bars and deal damage - attempting to do any other forms of damage to her in this state will do nothing, and if she is not Blood Punched fast enough she will recover and regenerate her shield.

The Khan Maykr will be flying around the arena and trying to maintain her distance from the Slayer. She primarily attacks with repeated blasts of golden light, which are always followed up by a sphere of purple lightning. She can also chant an incantation to call down a beam of light from the sky which moves around the arena, deals constant damage, and sets the ground on fire. After taking some hits, the Khan Maykr will also start electrifying portions of the arena and making them hazardous to walk on - the more damage she has taken, the more terrain she will electrify at once.

For the entire fight, special Maykr Drones will continuously spawn around the arena. These drones have red armor and more health than the normal variants, they can survive a Blood Punch or shots from the Heavy Cannon (Precision Bolt mod), but they can still be headshot by using the Ballista.

The Khan Maykr is voiced by Nika Futterman, who previously played as the voices of Asajj Ventress from Star Wars: The Clone Wars film and TV series, Zagara from StarCraft II, Alissa Vincent from Dead Space: Downfall, Dogen Boole from Psychonauts and the titular Chum Chum from Fanboy & Chum Chum.

Khan Maykr as she appears in the first story trailer for Doom Eternal, in the Maykr's Realm

Khan Maykr's size compared to the Doom Slayer, as seen at the Hell Priests' reunion 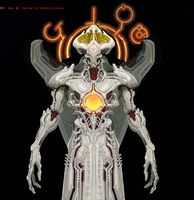 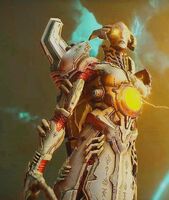 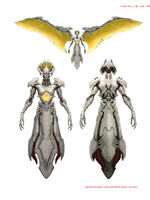