Justin Fisher is the creator of Aliens TC, the first total conversion to be released for a Doom game. After the release of Aliens TC in 1994, Fisher was offered the opportunity to work at several video game companies, though he declined the job offers because of wanting to finish his university degree. After getting his degree, Fisher contacted the now defunct Mad Genius Software, a video game company that began in 1995 and ended in 1999, and worked there for some time; the company's sole game, Gunmetal, was released for DOS and Windows-based computers on August 31, 1998. 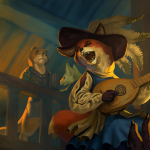