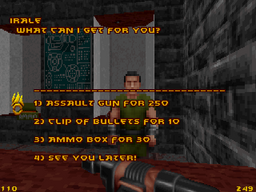 Irale is a character from Strife. He appears in the first level of the game Strife, although the player cannot reach Irale initially through normal means until talking to Macil.

Irale is The Front's "fixer", a black-market weapons dealer from whom the player can buy Assault Rifles, along with bullet ammo. Later on, he can train the player's accuracy once before the sewer mission.

If Weran's task is completed, Weran gives the player flamethrower parts that can be given to Irale to allow him to build a "for-human-use" Flamethrower weapon. After seizing The Order's castle and killing the Programmer he will also sell Poison Arrows and Phosphorus Grenades.

Retrieved from "https://doom.fandom.com/wiki/Irale?oldid=124780"
Community content is available under CC-BY-SA unless otherwise noted.