< Imp
View source
watch 02:46
The Quarry - The Loop
Do you like this video?
Play Sound
Sub-Pages:

The Imp returns in Doom Eternal. They are first seen from the very start of the game and remain a constant pest to the player throughout the campaign.

Imps still maintain their hunched over design from Doom (2016) but have undergone some slight design changes to more closely resemble their appearance in the original Doom.

Scavengers of the underworld, Imps are among the most common of beasts found on the scorched surface of the Hellscape. Lesser demons of Hell, the Imp possesses limited intelligence, driven only by a hunter's impulse to seek out prey - a task for which the Imp is naturally suited due to its innate capacity for violence. As a result of these attributes, the Imp makes for an ideal footsoldier and is oft deployed in the warring legions of Hell, easily manipulated and controlled by commanding highborne demons at the behest of the sovereign chapters. It is common for the Imp to appear at the frontline of an offensive attack, an expendable resource unleashed in great numbers to overcome and break through the enemy front.

The Imp has a slightly different appearance to its 2016 counterpart, possessing elongated back spines and pupiled orange eyes to more closely resemble its original design. It otherwise remains similar to its previous incarnation, being a nimble demon capable of pestering the player from a distance and traversing terrain with ease.

The Imp remains behaves identically to its previous iteration, lobbing fireballs at the player from a distance and clawing at close range. It also retains its ability to charge up a much larger fireball that deals significant damage to the player if they are hit. Imps are very mobile demons, scampering around the battlefield and almost always on the move, which can make hitting them difficult. Unlike its 2016 counterpart, they cannot use the environment to their advantage, making them grounded enemies.

However, they have paltry health and can be killed quite easily by any weapon. Notably, if an Imp is charging a large fireball, shooting them will cause them to drop the fireball and be temporarily stunned, allowing for an easy kill. 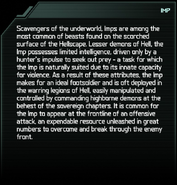 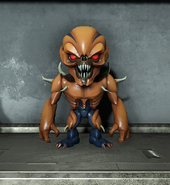 Facial Comparison between the Imp from Doom 2016 and Doom Eternal