The Icon of Sin appears as the final boss of Doom Eternal’s base campaign, where it must be fought in the level Final Sin.

Near the end of the game, Samuel Hayden informs the Doom Slayer that Khan Maykr is awakening the Icon of Sin as a last-ditch effort to destroy the Earth. To stop this, the Slayer travels to Urdak and confronts the Maykrs as they complete the ritual to awaken the Icon, intending to control it via the mortal heart of the Argenta it used to be. Using a knife given to him by Valen, the Slayer destroys the heart, causing the Icon of Sin to go berserk and travel to Earth independent of the Khan's control. This also breaks the Maykr's pact with Hell, allowing demons to invade Urdak.

After slaying Khan Maykr and returning to Earth, the Slayer battles the Icon of Sin atop a skyscraper, destroying the Maykr-made armor protecting it. Once the armor is fully destroyed, the Icon of Sin walks to a different location; the Slayer uses a portal to teleport to it to continue the battle. After a lengthy battle that results in most of the Icon of Sin's flesh being destroyed, it is left weakened enough for the Slayer to climb onto its head and bury the Crucible into its exposed brain, breaking off the blade to finally defeat the Titan.

Following the Dark Lord's death, all demons outside of Hell have been eradicated. This presumably includes the Icon of Sin, which was defeated on Earth.

The Icon's presence warps reality, damaging the intricate order of our dimension merely by existing within it. If the Icon is allowed to remain unchecked it would lead to the total devastation of Earth, followed by a breakdown of spacetime around the planet. The resulting black hole will eventually drag our entire universe down, casting it into the mouth of Hell as a conquest to be absorbed by the Dark Realm.

The Khan Maykr had taken measures to augment the titan, installing Maykr technology throughout its structure to ensure it could be controlled via its heart. With the ritual interrupted the Icon is now fully unleashed, raging across Earth until Hell consumes all. No longer bound by the Heart of the Betrayer's Son, the Icon of Sin is free from any measure of control that the Maykrs might have conceived. Only the Slayer, prophesied in Argenta legend to stand against the Icon, can stop this apocalypse.

Codex "As it is written in the prophecies of ancient Sentinel scripture, the Titans - towering elder demons of the infernal age - would return, unearthed from their immortal slumber. The Titans are believed to be harbingers of the end-times, primordial forces of chaos and destruction."

"Born from the tortured spirit of the Betrayer's son, it was by Hell's unholy design that the Icon of Sin was given flesh. The fearsome Titan, forged from the essence of mortal suffering, once bore a human soul - a soul now transmogrified and entombed within the still beating heart of its former self. The Betrayer, seeking to free his son from eternal torment within the depths of Hell, made an agreement - a pact sealed by the black fates of darkness - that promised to grant his son the chance to return from death. The son would live again, but not as a human - in Hell's endless cruelty, the son was damned to become the Icon, an inhuman existence bound only to its former humanity by the now disembodied, undying mortal heart."

The Icon of Sin's head is identical to its previous depictions and is very similarly sized to its 2016 incarnation, although it exchanges the biomechanical design of the original games for a fully organic look. Its brain is no longer exposed, although its head bears a pentagram-esque symbol on the same area. It also seems to have visible pupils, hidden behind a layer of skin protecting its eyes.

Most notably, the Icon of Sin's full body is shown for the first time in the franchise, featuring goat-like legs and hands akin to a bat's. Several of its bones are visible, mainly its ribs and shoulder blades. It is very muscular in build, and several red markings can be seen across its body. It also seems to have far more color to its flesh overall, compared to its original counterpart's white skin.

The Icon of Sin is first shown wearing a full-body suit of armor of Maykr design, colored an eerie white and glowing vividly with Argent Energy.

The Icon of Sin is most likely one of the most powerful demons to appear in the Doom series. Due to his great size and build, he has immense strength, durability and surprising speed which is further increased by his Maykr armor.

The Icon can throw flames from his hands and forehead. He can launch fireballs and a charged, concentrated beam from his head. He also summons meteors that rain from the sky. The Icon can also absorb the energy of demons and Makyr Drones near it.

Once a part of its body has sustained enough damage and is destroyed, it becomes immune to further damage.

The Icon of Sin also grows stronger the longer he is on Earth while his presence warps reality and if left alone would destroy Earth and create a black hole that would drag the whole dimension he is in into Hell.

In the first phase of the fight, the Icon of Sin is mostly stationary. It has eight armor parts (one on its head, two on each arm, two on its chest, one on its belly) that must be destroyed to progress the fight. Once an armor segment is destroyed, it will not take any more damage for the rest of the fight. Throughout the fight, various demons will periodically spawn around the map to assist the Icon.

In addition to some standard ammo/health pickups, the map features several BFG ammo pickups, as well as infinitely-respawning Blood Punch and Crucible charges to help deal with the lesser demons (although the Crucible can actually be used against the Icon, albeit somewhat impractically).

The Icon itself has a number of attacks it can use:

Once all 8 armor pieces have been destroyed, the Icon of Sin will call down a shower of explosive meteors before fleeing the scene. All demons will despawn and a large green portal will appear at the front of the map, allowing the Slayer to follow the Icon to a new arena for the second phase of the fight.

In this phase, the battle remains mostly the same - the Slayer must destroy 8 body parts of the Icon of Sin, and destroyed body parts will not take any further damage. The arena will still have infinitely-respawning Crucible and Blood Punch charges along with limited BFG ammo, but the demons that spawn will be generally tougher, with more Heavy demons spawning than the first phase.

The Icon of Sin now has limited mobility, as it can walk from the front of the stage to either side to launch attacks from different angles. In addition to all its attacks from the previous phase, it gains a few more:

Once all 8 body parts have been destroyed, the game will cut to a cutscene where the Slayer leaps at the downed Icon and drives the Crucible into its now-exposed brain, before breaking the blade off to defeat it.

The Icon of Sin boss fight can be quite difficult especially on nightmare difficulty. There are many strategies that will allow for the fight to become much easier and it can be killed in under a few minutes if done correctly.

You have effectively unlimited ammo for the Crucible. Don't be shy with it, you should be killing almost all of the heavy demons with this weapon.

This method abuses a glitch that uses Cheat Codes and weapon mods. If a cheat code is activated at the correct time along with swapping weapon mods at the correct time it is possible to have cheat codes active on a level that has not been completed and both weapon mods active at the same. By doing this with the IDFKA cheat code, and activating both weapon mods on the Heavy cannon it is possible to fire precision bolt shots at the speed of micro missiles, along with firing micro missiles at the same time. By doing this the Icon can quickly be destroyed due to the massive damage this will deal. This is the method typically used by speedrunners as it can destroy icon in minutes.

Through the fight, there are also BFG ammo lying around, if the player has 2 ammo to start with they can fire the BFG a total of 8 times through (both halves) of the boss fight. It is recommended that the player should fire once at the start of each half of the boss fight as it is easier to hit the Icon at the start, and they should continue to fire it throughout the fight whenever they feel overwhelmed by the other demons spawning throughout the fight. The BFG should also be used to target the main body and head of the icon of sin as it can be difficult to aim at the arms with it due to its slow traveling speed. If the main projectile of the BFG does not hit the Icon of sin, it will not deal any damage too it.

There are several more strategies that can be used to defeat the Icon of Sin. 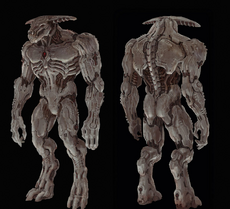 Concept art of the Icon of Sin in full armor. 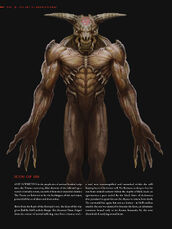 Concept art of Icon of Sin without its armor. 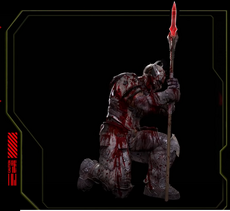 The Betrayer's son before his incorporation/transformation into the Icon of Sin.

The Icon of Sin in-game, inside its Maykr-style armor.

The Icon of Sin after the Slayer stripped its armor.

The Icon of Sin's model in the Collectible Viewer 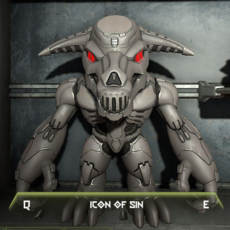 The Icon of Sin Collectable