Exultia
This page is about the Doom Eternal level, see the disambiguation page for other similarly named pages.

Hell on Earth is the first level of Doom Eternal.

This mission kicks off the main campaign of Doom Eternal, as the Doom Slayer, having been informed of Deag Nilox's location by VEGA, teleports down to Earth and arrives inside the Hell Priest's Barge. After killing all the demons and zombies inside, the Slayer enters Deag Nilox's chamber and quickly kills the Hell Priest. Nilox's death causes the demonic consumption of Earth to slow.

The Slayer then leaves the Barge and fights his way across a ruined city, somewhere in the "quarantine zone near the San Andreas chasm," i.e., California. Eventually, he arrives at the Citadel of Hell where the other two Hell Priests, Deag Grav and Deag Ranak, have gathered. He confronts the two Priests and shows them the severed head of Nilox. The Priests, though horrified by the sight, tell the Slayer that nothing has changed and that the Argent Energy flow will soon be restored, made from the souls of the non-believers on Earth. The Slayer threatens them with the Combat Shotgun, and Grav and Ranak teleport away.

The Khan Maykr herself then appears before the Slayer, in the form of a hologram. She warns him not to interfere any further, as this is humanity's time to repent and pledge themselves to the Maykrs. VEGA opens an exit portal and the Doom Slayer, ignoring the Khan Maykr's warning, leaves through the portal, returning to the Fortress of Doom.

The following is a list of enemies that appear in the level. Enemies listed in italics appear for the first time in the game in this level. 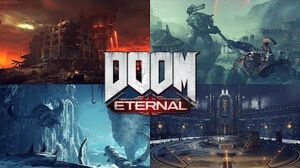