< Hell Knight
View source
watch 02:46
The Quarry - The Loop
Do you like this video?
Play Sound
Sub-Pages:

The Hell Knight makes a return in Doom Eternal. While looking mostly similar to its depiction in Doom (2016), noticeable alterations have been made to its design. A cybernetically enhanced variant, the Dread Knight, appears later in the campaign.

The Hell Knight, warrior beast among demons, has earned its place over the millennia in service of the eternal Archdemons. As imposed by the sovereign houses, Hell Knights have long served as barbaric enforcers of the Netherworld, impelling lesser demons by way of brutality. Rare among demon-kind for its innate regard from primal orders of hierarchy, the Hell Knight exhibits adherence to the prevailing rule of its demonlord masters. Requiring little compulsion on behalf of its highborne masters, Hell Knights readily serve the Elder Hell-gods for the extent of their lifespans, reaping great satisfaction in the way of war and desecration.

The Hell Knight's design is mostly similar to its depiction in Doom (2016), but with a few noticeable differences. The most obvious difference being the Knight's beady eyes entrenched inside of its skull, a detail that was not present in its previous iteration. Its color scheme has also become much lighter, with its armor going from a darker brown shade to a snowy white color. The rest of its body is more prominently purple shade. The Hell Knight still maintains its very well built muscle structure, but its neck muscles have become more densely packed in comparison to its last iteration.

The Hell Knight behaves mostly identical to its depiction in Doom (2016), rushing down the player and slamming into them with powerful punches and ground slam attacks. The Hell Knight is capable of shrugging off damage from most weapons unflinchingly, charging through them to reach the player as quickly as possible. This serves as both a blessing and a curse, as they will not dodge out of the way of the Slayer's fire, but also require significant punishment to prevent them from reaching the player and dealing devastating amounts of damage.

Keeping the Hell Knight at an arms reach is the best way to deal with it, as it is one of the few demons in the game that completely lacks a ranged attack, meaning it needs to get up close to deal damage. The best way to take it down is with fully automatic gunfire, which increases the Hell Knight's chance of being faltered, temporarily halting its charge. The Heavy Cannon's Micro Missiles (especially with the Bottomless Missiles mastery) and Combat Shotgun's Full Auto modification are capable of serving this role in the early game, but the Chaingun is capable of tearing the Hell Knight to shreds in seconds. Alternatively, a single lock-on burst from the Rocket Launcher will kill them. 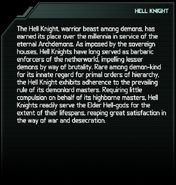