Will gib when health is low

Exultia
The Gargoyle is a newcomer demon in Doom Eternal, serving as a flying adversary to the Slayer. As cousins of the Imps, they possess a ranged attack and are very quick moving around the battlefield.

Like their Imp brethren, the Gargoyle is an agile, relentless pack hunter. Native to the Sentinel world, this beast has plagued the Sentinel Guard for centuries. As one of the few demon breeds that could bypass the walled defenses of Sentinel Prime, the Gargoyle could appear without warning and claim hapless townspeople before disappearing into the wasteland. Only the most skilled marksman of the Night Sentinels could intercept this aerial threat, a peril which demanded an ever-vigilant watch over the city's perimeter.

The Gargoyle, loyal to its name, is a grotesque demon with a split lower jaw and lanky, malnourished frame. Its hands possess large metal blades, which appear to be grafted onto the demon's body. Similarly to the Imp, it has a hunched over frame and well-built legs.

The stand-out feature of the Gargoyle is its wings, which allow it to maneuver an area with a freedom that few other demons possess, and hover in midair for a brief period of time.

Similar to the Imp, Gargoyles dart around the battlefield and rarely stop moving. However, unlike Imps, Gargoyles are capable of temporary flight, allowing them to gain line of sight with the Slayer in a way few other demons are capable. They launch green projectiles from a distance and will slash at the Slayer when up-close.

However, Gargoyles are very frail and will succumb to almost any weapon if they are unable to otherwise avoid the Slayer. Of note is their weakness in the air, as shooting them mid-flight will cause them to collapse back on the ground in a staggered state, leaving them open to an easy takedown. 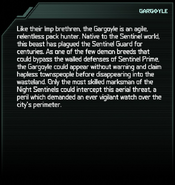 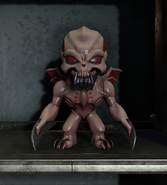 Gargoyle Collectable
Add a photo to this gallery
Retrieved from "https://doom.fandom.com/wiki/Gargoyle_(Doom_Eternal)?oldid=131615"
Community content is available under CC-BY-SA unless otherwise noted.