Enter the Doom 1:Lucido Attack is an RPG game, inspired by Doom and created using RPG Maker 2000. It was released in 2005 by a small Russian developer team - "DooM Kreators". All characters have real prototypes in Russian Doom community, especially from Doom Power Forum and largest Russian fansite, Doom Power.

The idea of making an RPG based on Doom appeared in 2004 when "DooM Kreators" was formed. First member of the team was Klon, the leading programmer of "DooM Kreators" (further as DK). He decided to make an RPG game with Doom elements (like monsters, environment, and atmosphere). Soon a demo-version called "Doom Project" was released. That demo was excoriated because of its bugs and some flaws. After that, the project went down rapidly. In August 2004 the project showed itself again. It was noticed by Olax, raVen and ProtosS. Right after that the project had received new programmers, coders, and writers. It was named "Enter the Doom" then. And again, the project went down shortly. But the idea of the game remained. In October 14 2004 Klon announced that a new team had been found. The members were Klon, Olax, Cherepoc, Morozzz.The last member was ProTosS - an excellent tester. The project started its regeneration process slowly, and in 2005 the game was finished. It was released in the winter of 2005, December 12th (version 1.0) 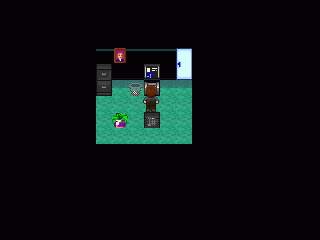 "This history has happened in one of the sad days, when there was a strong rain...

The game starts as MAZter is launching ZDaemon to play Doom. After playing for awhile, he suddenly realized that everything in the game became reality. Thinking of it as another bug of the game he decides to go forward to find an exit from this level and encounters a zombieman. Killing him, MAZter found that the wound he received in battle hurts. Unable to explain this thing, MAZter goes forward, killing zombies he encounters. His next tough battle was on the map, which resembles E1M8, with the Baron of Hell. Slaying the Baron MAZter meets Atreju, another doomer who has also found himself in the same situation as MAZter. After some discussion, MAZter realizes that this unexplainable thing is somehow connected with program named Lucido....

MAZter and Atreju are moving forward, and meeting with Klon, Post,MIT,Olax,Plazmer, and then Def411,who is leading them into a Doom-Grad, a town and in the same time - a defensive outpost built by Cherepoc. There, MAZter encounters raVen, who claims that he had seen Kirill, one of the doomers with....Lucido. The program, as raVen told, "promised a freedom to Kirill". While Def411 thinks raven is crazy, MAZter suspects that Lucido can be behind everything, and he decides to look for Kirill. After some searching, he found Kirill....talking with Lucido, just as raVen told. Kirill promised to give Lucido an opportunity to destroy doomers and Doom-Grad as well. MAZter understands that raVen told the truth, and rushes away from that place.

He arrives to Urfin, the leader of the Doomers in the Doom-Grad, who thinks that killing a Cyberdemon will return them all into real world (like on the game) and informs him about Kirill`s betrayal. Urfin agrees not to go to Hell with his squad for a while, and tells him that Cherepoc is making an assembly at his place. MAZter arrives there, and after a discussion doomers are realizing that they can die in this world and in our dimension, if they don`t kill Lucido.

When assembly finishes, Costja, one of MAZter`s friends, is leading him to his new apartment because it`s got dark outside. There, MAZter falls asleep and sees himself in the maps Wolfenstein and Grosse (MAP 31 and 32 of Doom2.wad), fighting with Nazis. But instead of Cyberdemon in the MAP32, suddenly aLexx appears and tells him "not to touch the fire dagger". MAZter wakes up, and he hears Costja`s cries that raVen and ProTosS stole that dagger, and that they have ran away from Doom-Grad. Then Costja`s giving to MAZter a key to the room, where aLexx is doing his work in decyphering hieroglyphs, found in the underground system. MAZter arrives at aLexx`s place and tells aLexx about his dream, and aLexx is warning him that "I would not began to trust such dreams". Then MAZter goes back to Doom-Grad, where Costja`s informing him that Urfin decided to make a campaign to Hell, and the main character goes to his apartment to finally have a rest. But in his dream, he sees raVen in Hell, who is telling him that he`s doomed because of that dagger.

After waking up, MAZter visits Cherepoc next time, who`s giving to him his portable laptop PocketUAC for buying something on the way. MAZter is taking with himself Post, Woody, Klon and Plazmer, and then the team decides to check entrance to Hell Gates. In the underground catacombs, they found Jake Crusher, who`s lost there. He joins the team, and soon doomers are being teleported near Hell. After a battle with stone demon, MAZter and his team were captured by Kirill`s zombies.

In the same time, near Citadel of Ghosts, raVen and ProTosS found Remy, a doomer who is armed with the BFG. The trio goes down to Hell, where they are talking about the dagger, and why Lucido is looking and at the same time, afraid of it. Then they see abyss. ProTosS decided not to put his armor away, and jumps, but falls down.

After some time, MAZter is waking up in his prison cell - but already rescued by Olax and Barsic13, a doomer who has cat abilities. Together, they returned to Doom-Grad, only to find it already destroyed, just like the bots, who were protecting that place. But there were no dead doomers. MAZter, next time seen at camping place, remembers about Urfin`s campaign to Hell, and decides to follow him. After some hard battles, MAZter was able to meet raVen, Remy, Urfin (who got separated from his group) and ProTosS, who survived the falling into abyss. Together, they were able to meet the rest of the team, who were led by Klon. In front of the group, an old wooden bridge is seen, and characters have decided to go to the other side. But the bridge suddenly falls down with everyone on it. But MAZter and the others haven`t died.

Main character have found the fire dagger, and with it, MAZter kills Lucido. But in the same time, when Lucido`s ass was kicked, aLexx appears and tells that everyone, who touched the dagger, are doomed to stay forever in this dimension. MAZter also finds raVen, Olax, ProTosS, Remy, and Woody, and thinks that everything is over, but suddenly Kirill appears. In the final battle, Kirill was killed by MAZter - and everyone were sent into the real world, because Kirill had a part of Lucido`s power, and when he was killed, his unleashed power returned doomers into reality.

MAZter finds himself sitting near a computer display, and realizing that he was a hero in the game. Then he remembers that he needs to go to work, when suddenly, outside his home, he meets a zombieman.... 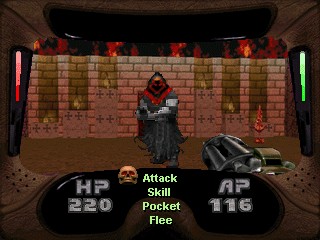 MAZter. The main protagonist of the game, in reality he is a Doom Power site`s and forum`s administrator. From Moscow. Honest and judicious doomer.

Klon. The creative person, in reality he is the main programmer in the DK, and was a main man in the development process of the game. He is from Smolensk. Also he and Jake Crusher translated this game into English.

Post. No-one knows where he is from. He probably likes the Matrix movies...

Jake Crusher. A veteran of network fights, in reality he is a doomer from Latvia, a town called Daugavpils. Also, he and Klon translated this game into English.

Plazmer. One of Doom`s philosophers, in reality he is a doomer from Krasnoyarsk, Russia.

Woody. Little genius of hacking, in reality he is a doomer from St. Petersburg, Russia.

raVen. The abnormal doomer, suffering fits of anger and superfluous suspiciousness, in reality he is a doomer from Kuvandyk, Russia.

Remy. Game`s secret character, and nothing is known about him.

ProTosS. A doomer-joker. Hometown is unknown.

Olax. In Russian community also known as Far. The creative person. The author of many stories about Doom, in reality he is a doomer from Krasnoyarsk, Russia.

Urfin. One of those Quakers, who is respecting Doom as FPS grandaddy, in reality he is a doomer and a quaker. His hometown is unknown. 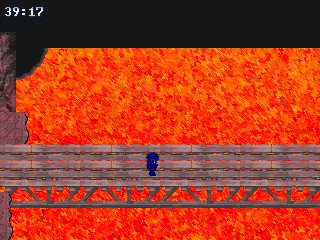 Because the game was made by using RPG Maker 2000, there is nothing special in it`s visuals. Even although the game resembles SNES visually, players can see pixels on the screen, since there is no support for 3d accelerators. However screen size can be turned into window mode by pressing F4, and F5-the screen will become less than windowed (still, it`s playable). Also, some of the textures, objects and characters were drawn to look similar to the original Doom. 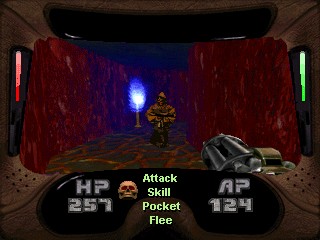 As a RPG, the game has it`s own unique features, probably never seen in any RPG`s like this before. These features are: 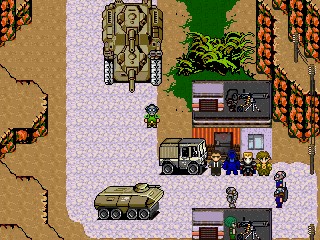 Since the game was released, it was well accepted not only by Russian Doom Community, but also by players, who never played Doom, although there are some flaws:

So overall, in Russia the game was accepted quite well.

A sequel to EtD is currently in development. A short demo can be found on the Internet, although as of now, only in Russian language.

Also, an expansion-pack to the game, named "Enter the Doom: Back to Doom-Grad", is also currently in development.

The game was translated from Russian to English by Klon and Jake Crusher.

The final version of the game in English was released on 14.04.2008. It can be downloaded from DooM Kreators` website - http://www.etd-game.org/files/EtD1Setup.exe

And any questions, concerning the game, gamers can ask or discuss here - http://etd-game.ucoz.ru/forum/5

Additionally, on the 2.05.2008, a trailer of the game was released on YouTube. http://www.youtube.com/watch?v=ARlqtX9ZNls

Retrieved from "https://doom.fandom.com/wiki/Enter_the_Doom_Chapter_I:_Lucido_Attack?oldid=118162"
Community content is available under CC-BY-SA unless otherwise noted.