The player controls the same unnamed Marine, that was in Ultimate Doom. The entire map is composed of 13 (may be inaccurate) sectors filled imps, zombies, sergeants, demons and lost souls. Just before the character appears two keys - yellow and blue. What's interesting - in some places on the floor does not have a texture - just visible in the background. If you decide to play the ultra-violence skill level, can greatly regret - the level of difficulty just crazy >:) 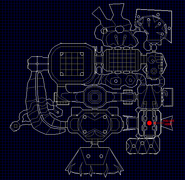 Player spawn point (show in the up picture)

The battle with a Cacodemon in "hell" space using double-barrel shotgun (brutal mod is not used, it really is not fake; The first appearance of the walls with holes)

Exit in the map (behind the current position the player has a red key, this is the first case where in the first episode, at the initial map the player can collect all three keys)
Add a photo to this gallery

Retrieved from "https://doom.fandom.com/wiki/E5M1:_Logos_Anomaly_(Doom:_The_Lost_Episode)?oldid=111790"
Community content is available under CC-BY-SA unless otherwise noted.