Doom Wiki
Register
Don't have an account?
Sign In
Advertisement
in: E3M8, E3M7, Levels by name,
and 2 more

View source
watch 02:17
New Pokemon Games - The Loop
Do you like this video?
Play Sound

E3M8: Dis (E3M7 in SNES) is the final map of Inferno in Doom. It features a boss battle with the Spiderdemon (also called the Spider Mastermind). Dis is named after the capital city of Hell that appears in the "Inferno" section of Dante Alighieri's epic poem The Divine Comedy. It uses the music track "Facing the Spider".

This map is not to be confused with the "Dis" in the Jaguar/3DO/GBA versions of Doom, which is a renaming of the E2M9: Fortress of Mystery.

To complete this level, the player must kill the Spiderdemon, who is the boss of the episode.

It appears on the bottom right 'clover leaf' of the map with a Baron of Hell (on harder skill levels) in the top left leaf and two Cacodemons occupying the other corners of arena. Almost all ammo is on a raised walkway above the main arena containing mostly of single rockets and a few cells (B), except for the plasma rifle, which is in a small room in the center of the map (C). The only way to access the walkway is from a set of steps to the north of the central building, or by walking along the walkway upon entering the level. This lack of ammo provides extra challenge and you are vulnerable to the Spiderdemon's hitscan attacks. Outside as there is barely any cover (except for the thin pillars of the circular room where the plasma gun and megaarmor is located), to protect yourself from the Spiderdemon's bullets, moving quickly is key to survival here. There are no health items here, so make your health count!

The level is particularly easy if you have accumulated an arsenal from previous Inferno levels, only the shotgun will have little use due to its short range. If you have a BFG9000 and extra cells from the previous levels, fire the BFG at the Spiderdemon point-blank before it has a chance to retaliate, which will kill it in a single shot. You need to make sure you fire the BFG standing immediately next to the demon, or else you might need more shots.

The small circular room in the middle of the arena contains a plasma rifle and combat armor (note that the doors won't automatically close once they have been opened). Take note that once you enter this room, any doors you have not already opened manually will open automatically, leaving you open to the boss. 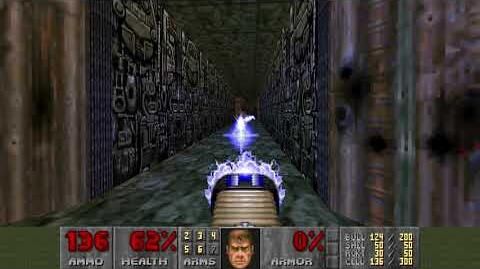