View source
watch 02:52
Roblox: DeepWoken - The Loop
Do you like this video?
Play Sound

E3M7: Gate to Limbo (MAP22 in PSX/Saturn/Jaguar/3DO/GBA, E3M6 in SNES) is the seventh map of Inferno in Doom. It is referred to as Gate to Limbo on the intermission screen. It uses the music track "Waltz of the Demons". The name obviously comes from Dante Alighieri's The Divine Comedy, where Limbo is described as the first circle of Hell, a somber place where the unbaptised souls dwell (Canto IV). The par time is 2:45.

A set of 4 shotgun shells (Thing 62) and an energy cell (Thing 123) have no flags set for any of the difficulty classes, so they do not actually appear in the level.

The switch that is tagged to lower the wall with the Baron behind it in the maps southeast corner is also tagged to the two blue doors along the east side of the map. However, because the floors of these doors are already the same height as the surrounding floors, this has no ill effects on the map.

Linedef 971 above the northwest teleporter in the blood maze lacks an upper texture on one of its visible back sides, hence producing a hall of mirrors effect. 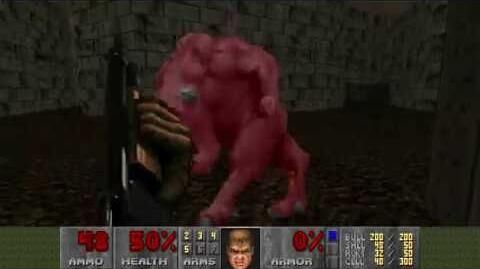 You can jump across two gaps while preparing the exit.