watch 03:19
Wiki Targeted (Games)
Do you like this video?
Play Sound

E3M5: Unholy Cathedral (MAP20 in PSX/Saturn/Jaguar/3DO/GBA) is the fifth map of Inferno in Doom. An early version of it is the third map of the Doom press release beta. It uses the music track "Demons on the Prey". The par time is 1:30.

At the start, you can see two openings. Take the one on the left, and open the door inside. Go in, and grab the shotgun shells to your right. Then turn around, and follow the hallway to two doors. One of them leads to four teleporters. Go through that door, and walk on the teleporter. When you get warped to a new location, a door will open, and the room has power-ups, and a Demon or Baron of Hell (depending on the skill level). Go in the room the enemy came out of, and grab the goodies (this will add to your secrets percentage). In each corner of this room is a teleporter. Take the teleporter in the northwestern part of this room (use the automap to find the exact teleporter).

In this new room, kill all the enemies here. Heal yourself with the medikits in here too. Also in this room are two doors next to each other. Take the one on the right. Go into the room, and follow the hallway to a red pillar. Walk through it from the south end, and then the wall in front of you will lower. Go into this room. In this room, there is a crushing pillar in each corner of the room with a switch behind it. Hit the switch under the northeast pillar, and then in the northwest part of the room, a platform will lower, containing the blue key. Now, behind the southwest pillar in this room is a teleporter. Go through it (the pillar locations are from the entrance of the room).

Now, you are in this familiar room again. This time take the left door. Follow this hallway to the Blue Door, killing any Imps or Lost Souls in your way. Go through the blue door, go left, open the exit door, and go through the exit teleporter.

You may optionally take the skull-covered door to the right of the exit. In the right of the room behind it, you can find a BFG 9000 in the eastern alcove. However, firing any weapon in this room will cause a large number of enemies to teleport into the area. Hence, it is best to try to avoid the single Imp in the room, that's acting as bait, rather than killing it. 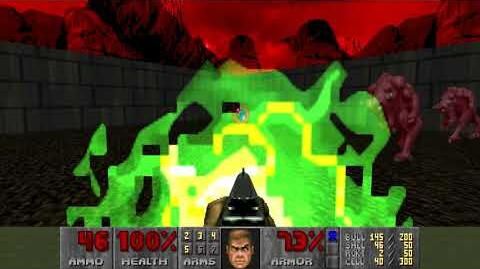 Retrieved from "https://doom.fandom.com/wiki/E3M5:_Unholy_Cathedral_(Doom)?oldid=142535"
Community content is available under CC-BY-SA unless otherwise noted.