This level occupies the map slot E3M2. For other maps which occupy this slot, see Category:E3M2.

E3M2: Slough of Despair is the second map of Inferno in Doom. As can be seen from the map, its plan is based on a skeletal human hand - whether a left hand's upper side or a right hand's palm. The name may be a reference to "the Slough of Despond", from Pilgrim's Progress by John Bunyan. It uses the music track "Donna to the Rescue" and has a par time of 0:45.

Unlike most of the other levels, which take place in buildings, this level takes place outdoors (like Mt. Erebus). The Slough is a depression in the ground, somewhat like a crater or gulch; the "fingers" are a series of caves.

At the start, keep to the left hand wall and just keep firing at any monster and/or demon that comes your way. If you get outnumbered, simply backtrack to the start and let the monster(s) follow you. Begin firing at the monster(s) until you've defeated them. Keep moving along until you get to the blue skull key (at the end of the "pinky finger"). Then turn around, go straight, and when you're out of the alcove, take 2 lefts into another one (this is the "ring finger" on the map). Walk up to the wall in front of you. Kill (or avoid) the Lost Souls that were behind the wall and go into the room they were in. Open the Blue Door in here, hit the switch, turn around, go right, grab the health and ammo, and get to the exit teleporter.

Other things of interest: Just south-east of the start of the "pinky finger" you'll find a blue shield (and on the two highest difficulty levels, a Cacodemon).

Also playing on the two highest difficulties, the real problem is ammo, so if you need it you can get plasma rounds and a bunch of shotgun shells at the start of the "index finger" where there is a bunch easy to kill Sergeants. To get in to them afterwards you have to shoot the back wall in one the cubes with the dead Sergeants to lower the pillar which will reveal a red triangle on the floor; walk across it and the low wall in front of the Sergeants' cubes comes down. 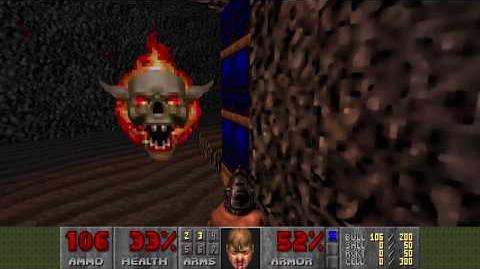 Retrieved from "https://doom.fandom.com/wiki/E3M2:_Slough_of_Despair_(Doom)?oldid=127878"
Community content is available under CC-BY-SA unless otherwise noted.