View source
watch 02:52
Roblox: DeepWoken - The Loop
Do you like this video?
Play Sound

This level occupies the map slot E3M1. For other maps which occupy this slot, see Category:E3M1.

E3M1: Hell Keep is the first map of Inferno in Doom. It was designed by Sandy Petersen. It uses the music track "Untitled". The par time is 1:30. The secret map E3M9: Warrens is structurally based on E3M1 but has extra rooms, items and enemies, and requires two skull keys.

This map is not to be confused with MAP17: Hell Keep in the PSX/Saturn/Jaguar/3DO/GBA versions of Doom.

This map is short and it isn't very difficult, there are only 4 big rooms and 3 corridors, and 26 monsters - making this map very easy for speedruns.

You start in front of a closed eye, which is a switch (A). Press it and the platform you're on will rise, revealing a big outdoor area, a red wall with a door ahead of you, and some Imps, ammo and (on I'm Too Young To Die and Hey, Not Too Rough) health. After you have taken down the Imps, press the switch to the left of the door to open it (B).

On Hurt Me Plenty and higher, there are Cacodemons on the other side. Since you have only a pistol, limited ammo, and plenty of space, you might want to open the door first and maneuver the Cacodemons into taking out the Imps for you, while taking some damage themselves. Kill the Cacodemons and move forward to a fork in the path. Go straight and turn left into a curved bridge with blood on both sides. There is a shotgun here. The bridge will sink into the blood in sections as you step on it so run quickly across and through a fake wall before it lowers (C). There may be Imps on the other side of the fake wall, which depends on your skill level. When you're done with the Imps (if any) go to the right and open the door with the face on it. Then go to the fork and take the other path (D).

(If you ran too slow or fell off, you'll be in the blood and taking damage. In this case, run to the wall at the left and turn left when it ends. Run to the end of the blood and go up the stairs. Then go the other path in the fork.)

Open the door and kill the enemies that you see. Then open the door to the right and go into a narrow hallway with Demons. Kill them and open the next door into a room with red pillars and a few items. (Be aware that once the door closes behind you, you cannot backtrack.) Pick them up and enter the next room, which is filled with Imps. Once you are done with them, collect secret #1 and go through the exit door (E). Collect some health and ammo, then go on the teleporter to exit the level.

In the room before the exit room, open the hidden door on the left to reveal a rocket launcher, shotgun shells, and a stimpack (F).

Two "hanging leg" decorations (Things 80 and 82) have no flags set for any of the difficulty classes, so they do not actually appear in the level. 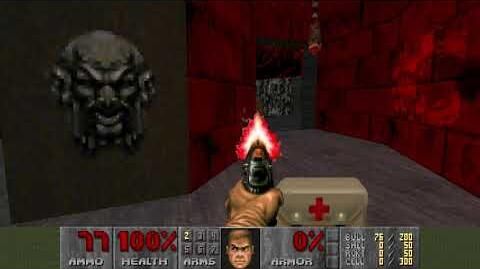