E2M8: Tower of Babel (MAP23 in PSX/Saturn, E2M5 in SNES) is the final map of The Shores of Hell in Doom. It features a boss battle with the Cyberdemon. It was designed by Sandy Petersen and it uses the music track "Nobody Told Me About Id".

This map is not to be confused with MAP16: Hell Gate, which is titled "Tower of Babel" in the Jaguar, 3DO, and Game Boy Advance versions of Doom.

You start the level in a small octagonal room. Pick up the combat armor here before you do anything else. There is a short pillar in the center of this room with a switch on each of it four sides. Pressing one causes the stairs in front of it to raise. Press all four switches. Walk up any of the four sets of stairs until the wall with the tortured Baron of Hell ahead of you opens, but do not walk through yet, because if you do, the Baron wall will immediately close behind you and cannot be reopened from the outside. Open the three remaining Baron-walls in this manner as well -- this allows you to re-enter the starting area if you need to. Once they have all been opened, exit to the huge outdoor area.

There are a number of Lost Souls outside; you might want to destroy them so they do not get in your way later, but it is not necessary. Walk around the building until you find the Cyberdemon -- or he finds you.

Use the pillars for protection if you need to. He occasionally wanders into one of the four supply rooms adjoining the main building; lure him out if necessary. In addition to a rocket launcher, these four rooms contain a total of 150 rockets and a pair of soul spheres to replenish you. If you are playing the Playstation or Saturn version, use the rocket launcher on the Cyberdemon so that you can use the supply rooms to replenish your ammo afterwards; you'll need plenty of it in the levels that follow. If playing the PC or Super Nintendo version, do not be afraid to waste ammo, because this is the last level of the episode anyway. In particular, if you have a plasma gun with energy cells, do not hesitate to use it. Mastering circlestrafing will greatly increase your effectiveness. One additional trick that takes a little bit of setup is to open all the doors, have the Cyberdemon go into one room, then race around to the room on the opposite side. If you got over there quickly enough, he will stay in "his" room, unable to approach you. So long as you pay attention to when he shoots at you, you'll be able to dodge his shots, and shoot at him with relative impunity. Once the Cyberdemon is destroyed, the level will end. 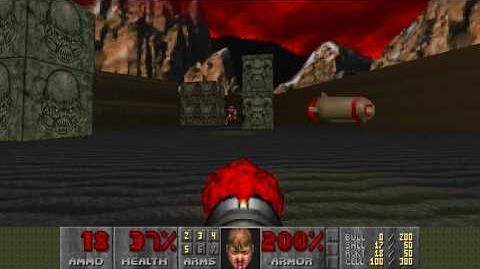 One of the starting area's doors.