Halls of the Damned

E2M7: Spawning Vats (MAP15 in PSX/Saturn/Jaguar/3DO/GBA/32X) is the seventh map of The Shores of Hell in Doom. E2M7 was the first level started for Doom, and early versions appear as E1M1 of Doom 0.4 and E1M11 of Doom 0.5. It was designed by Tom Hall and Sandy Petersen and it uses the music track "Waltz of the Demons." The par time is 4:00.

As the last of the levels representing man-made complexes, Spawning Vats is in effect an amalgamation of all previous bases, including a container warehouse and a computer complex.

At least on ultra-violence and easier, if you warp in and start with the fist and pistol, avoid fighting the demons in that room where you start out. Instead, dodge them and run to the right (west) corridor, which will bring you to the room with the blue key door. There, you can dispatch a sergeant to get his shotgun, pickup a box of shotgun shells, and then take down the two demons easily. Do not continue past the blue key door room yet, as you do not have the ammo to deal with the tougher monsters yet.

Beware of the door that closes behind you when you enter the descending stairs to the crate room (warehouse). Before you step on the stairs, use a couple fist punches to alert some demons, which you can dispatch before getting trapped. Getting the berserk will allow you the dispatch the rest of the demons easily. Save the invulnerability for taking on the baron and cacodemons outside, where you can save ammo by using the berserk fist.

Be careful when you go through the yellow key door, as there are a large number of imps behind it and they will have been alerted to your presence, since that area is connected to the outside where you fought the baron and cacodemons. Also avoid the middle trench of the hallways which are illuminated by blue lights, since these will reduce your health. 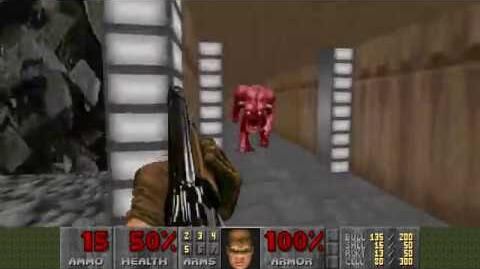 A more castle-like starting room; this texture theme is used largely on some console ports of the game. (Captured from ePSXe)...

...In the "Special Editions", Mancubi may appear in this map.
Add a photo to this gallery

Retrieved from "https://doom.fandom.com/wiki/E2M7:_Spawning_Vats_(Doom)?oldid=137211"
Community content is available under CC-BY-SA unless otherwise noted.