E2M6: Halls of the Damned

E2M6: Halls of the Damned (MAP14 in PSX/Saturn/Jaguar/3DO/GBA/32X, E2M4 in SNES) is the sixth map of The Shores of Hell in Doom. It was designed by Sandy Petersen and it uses the music track "Sinister." The par time is 6:00.

The base featured in the level is likely (despite its hellish name) man-made and is perhaps supposed to resemble an underground bunker or tunnel complex such as the real Cheyenne Mountain base.

From the start point, continue into the room and then turn right and open the door. Kill the cacodemon and demon and press the switch. You should see a new opening near the start. Get to the switch, press it to raise stairs to the berserk pack. Picking it up, you should see a new opening in the nukage, follow the tunnel to a switch that opens up another wall near the path. You will pass the three exit doors, cannot be opened because you don't yet have the keys, instead open the door to the right to get into the hallways. Follow the instructions for the skull keys.

The blue key is simple to get. All you have to do is follow the path southeast and then northeast to the blue key. Once you get it, however, two traps will open up.

The red key is more complex to get. First of all find the opening to the southwest to a maze. Near the south of it is a door. Open it and follow northwest then southwest, and then somewhere should be the red key.

Go just north of the entrance to the maze, then immediately open up the door to the left. Follow the path to another door, into a small corridor with a 'No Humans Allowed' sign. Press the switch to the right to open the wall up. Follow the path to a crossing with eight paths. Take the south path and open the door, to emerge into a vine room. Go around the structure in the middle to access the yellow key. Then escape through the yellow door (you require the yellow key if you are opening the door from the yellow key room) and backtrack to the door to the hallways.

Open the blue, red and yellow doors in front of each other and press the exit switch. 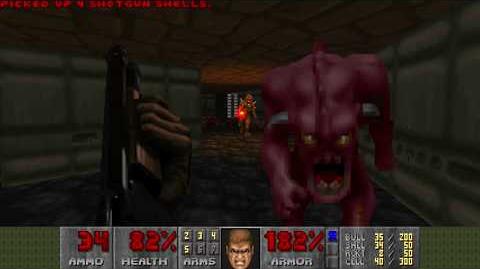 As stated above, it is possible to complete the level without any keys at all via the "void glide" trick, which is near the blue key. Navigate to the exit switch, then try your best to press the exit switch from outside, by repeatedly pressing use, and in the correct angle. This saves a lot of time for the speedrun, which is done by most Compet-n speedrunners.

A couple of revenants appear in the PlayStation/Saturn ports' versions of the level.

The level is referenced in the Doom novels, known as simply the "Central Halls". Though not going into grand detail, the multi-colored exit doors and the dark, maze-like corridors of halls are the main focal points of its references.

Retrieved from "https://doom.fandom.com/wiki/E2M6:_Halls_of_the_Damned_(Doom)?oldid=129461"
Community content is available under CC-BY-SA unless otherwise noted.