E2M1: Deimos Anomaly (MAP09 in PSX/Saturn/Jaguar/3DO/GBA/32X) is the first map of The Shores of Hell in Doom. It was designed by Sandy Petersen and Tom Hall and uses the music track "I Sawed The Demons". The par time is 1:30.

This map consists of seven sections linked by pairs of teleporters. Most of these move the player quite a distance, so it is easy to lose one's sense of direction; watch the automap carefully to see where you are.

From the start point, go past the teleporter (A) to get the blue keycard (B). The glowing cross is actually a damaging floor (10% per second, or 5% on I'm too young to die), but if you straferun through it, you will not usually be hurt. Then go back and teleport.

Follow the large gray room around to the right, where there is a blood "river". The bridge lowers as you step onto it, so cross quickly, and teleport again (C). You will emerge in a green brick room, where your path is blocked by a large platform (D). In the alcove ahead on your left are two skull switches; click the right (south) switch to lower the platform. Proceed west and then around to your left to the blue door (E). Go through and teleport.

Now walk forward through the dark green room until you are nearly at the far wall, then turn around. You will see a red button on your left, to the northwest (F). Press it to raise some stairs just ahead of you and to the right. Go up the stairs and click another red button (G). This opens up a teleporter near the first button (H).

Teleport yet again. Walk forward to lower the wall in front of you, which reveals the exit door (I).

The red triangle in the large gray room (P) is also a damaging floor. Try not to spend much time there.

One of the square islands in the red slime river (the one with the shells and armor) also sinks as you step onto it.

If you play on Ultra-Violence or Nightmare!, there is a Cacodemon hiding behind the lowering wall in the last room.

There are 5 known anomalies in this level's REJECT table. 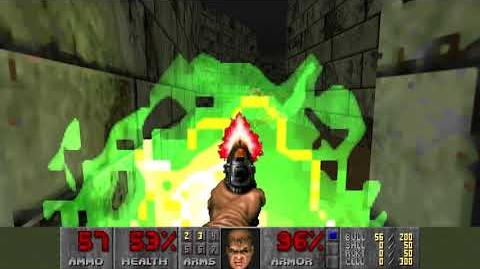 Trudge not, lest ye be judged

This broad platform keeps monsters away, but also blocks your path

Entrance to secret #4
Add a photo to this gallery

The small size and relatively linear topology of this map permit few route optimizations, and the obvious paths are more or less the shortest. For a straight speedrun, pick up the blue key and then go directly to the exit. For a max run, go to secret #2 as soon as you have pressed the button to open it, so that backtracking is minimized.

Additionally, 100% kills and 100% secrets are nearly equivalent because:

To a certain extent, the UV max style even encourages 100% items: it is difficult not to pick up the armor helmet next to the red key, and you may well bump into the computer map while dodging the Spectre. [1]

In the UV speed and UV pacifist categories, one's time is determined largely by how quickly one weaves through the pack of Demons to the blue door. Compet-N entrants tend not to open fire immediately, instead waiting for friendly fire to distract the Demons and spread out their line somewhat. The fastest pacifist entries, after clicking the skull switch, hop back into the northeast corner of the passage (or the teleporter pad) — thus concentrating the monsters along the north (south) wall — then quickly run around them to the left (right).

While there is more than enough time to kill one Demon as the large platform lowers, you must make certain to miss all of the others [2]; nevertheless, in most categories, this option has proven more efficient than augmenting one's health in secret #3. [3]

In addition to the risk of becoming surrounded by Demons, the last Cacodemon usually scores one hit in the time it takes to shoot the Imp; therefore, most players pick up the green armor. A combined health and armor of 40%-50% when you enter the last teleporter seems to be adequate, and 70% is fairly safe.

The accepted strategy at the exit is to fake out the Cacodemon by lowering the wall from one side, then circling around to the door on the other side. This requires some luck with fast monsters, because the Cacodemon can always see you, so he would rather fire than move. The current NM speed record optimized this part by shooting the Cacodemon once to push it away from the door. [4]

When 100% kills is required, your time may be greatly affected by where you use the plasma gun. Most Compet-N players save every cell for the crowd guarding the blue door, although some like to divide them among the three Cacodemons, or clear secret #2 very rapidly as a defensive posture.

Modern maxkills recordings approach secret #2 aggressively: lunge forward briefly to encourage infighting, then circle the room clockwise to keep everyone roughly in the center. The infighting is more pronounced with fast monsters (it is not unheard of for two or three Demons to pin the Cacodemon against a wall [5]), and in fact this strategy is also used in NM100S to keep the player from being cornered.

Drew "stx-Vile" DeVore has argued that secret #1 should be opened only after getting the plasma gun, to prevent any Imps wandering inside and therefore taking longer to chase down. [6]

If you are out of plasma when you reach the blue door, the Cacodemon on the stairs should be drawn out into the room (as the stairs rise) before being attacked. Because it takes more shots to kill than the other four monsters, more time is saved by shooting it while the teleporter opens than by shooting its companions while the teleporter opens. [7] [8] [9] This plan may also help in NM, as charging up the stairs toward the Cacodemon carries a high risk of being attacked from behind.

As a final tiny optimization, you can open the exit door while the last Cacodemon is still alive, so that you can kill the Imp from inside the exit room. [10]

UV -respawn runs can be sped up by methodically clearing the large gray room again after collecting secret #2. This allows the player to ignore all of the Cacodemons, and perhaps a few Demons as well, who simply take more time to kill than humanoids.

There are only 85 bullets on this level, so the Tyson player requires alternatives to ranged attacks. Most of the Demons must be punched [11], infighting in the large gray room can be quite important (some players do not even pull the trigger until they reach the wall switch) and a certain amount of telefragging at the blue key is typical. For increased efficiency and danger, the first two Cacodemons may be punched from behind once infighting has begun. [12]

If you stand in the small room leading to secret #3, only one Demon can approach you at a time (this can help even in UV max). Because of the large-scale geometry of the level, entering secret #3 causes monsters to move away from that teleporter, a useful gambit if the player is losing ground. [13]

Pacifist runs of this level have been completed using the UV speed route (excepting, of course, a less direct approach to the exit button).

It is not necessary to activate the wall switch after crossing the red slime river. Simply click in the air as if the small block had already risen.

The music for this level is inspired by the track "Big Gun" by AC/DC.

This is the second time a key isn't necessary to complete the level, the first being the yellow key in E1M3.

In the Playstation/Saturn port of Doom, a Hell Knight is in the large, curving room after the first teleporter.

Retrieved from "https://doom.fandom.com/wiki/E2M1:_Deimos_Anomaly_(Doom)?oldid=125142"
Community content is available under CC-BY-SA unless otherwise noted.