E1M4: Command Control (MAP04 in PSX/Saturn/Jaguar/3DO/GBA/32X) is the fourth map of Knee-Deep in the Dead in Doom. It was started by Tom Hall and finished by John Romero, and uses the music track "Kitchen Ace (And Taking Names)". The par time is 1:30.

At the start, go to the door, but check the wall to the left and it should
open. Take the backpack , medikit , and shotgun shells , and go back out to open
the door.

Kill the 3 Zombiemen and 2 Imps to the left, and take the middle opening in this room. Kill the Zombieman and Imp in here, and hit the switch and a lift should lower. Take it up
and go right being aware of the 2 Zombiemen on your left, and walk up to the doors in this room. They should open by
themselves. Go in, kill the 6 Imps, grab the 5 health bonuses and chaingun, and
pick up the blue key. If you are locked it, stand on the light the blue key
was on, the doors will open. Get out of this room.

There are 4 ways out of this room. Look for the entrance that has white lights
to the left and right of the opening. When you do, go in and go left. Kill the
6 Shotgun Guys(4 coming from the hallway and 2 on the platform) here , and enter the Blue Door.

Watch out for 16 Imps and 7 Demons in this maze (try to kill them if they get in
your way). To get out, go right until you hit a wall, and go right again into
this little small room. Take a left, and go left again, and you're out of this
maze. Turn right to get some health, armor, and the yellow key. Go up the
stairs in this room, and hit the switch next to the Yellow Door. Open the
Yellow Door, go right, go left, and then left again up the stairs, and cross
the bridge to the exit door. Open it, and hit the exit switch.

Sector 41 (the yellow door) is incorrectly assigned tag number 3, which is used for the square lift just east of the large central room (B). This seems to prevent the door from opening unless the lift is fully raised.

Sidedefs 345, 353, 369, and 379 are missing their lower textures, and sidedef 872 is missing its upper texture. Each of these results in a small Hall of Mirrors effect (see demo below).

Two shell pickups (Things 16 and 48) have no flags set for any of the three difficulty classes, so they do not actually appear in the level.

The blockmap bug can occur in the long central corridor of the maze.

There are 25 known anomalies in this level's REJECT table. 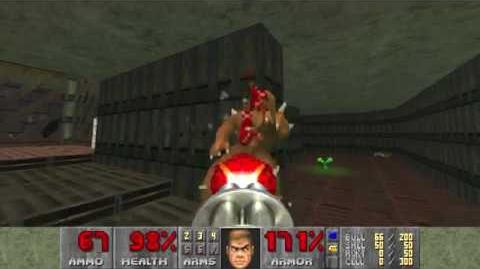 Press the switch to raise the exit bridge

At one end of the slime river (secret #2)

It is possible to jump across the nukage pool from the east side (onto the narrow ledge). This allows one to go directly to the yellow key, bypassing the blue key and the maze.

The story behind the discovery of this trick is given by Compet-N:

The first player to discover the trick was Steffen Winterfeldt, who sent his demo to Yonatan, but for some reason this was not included in COMPET-N. Later, Jonas "Chrozoron" Feragen independently discovered the trick. As he was never a COMPET-N player, he sent his demo to Yonatan, who did not upload this either. Later, Rudy Jurjako also discovered the same trick. He somehow sensed the truth in his text file: "I have a hard time believing that I was the first to discover that jump...". Just one day later, Ralf Schreivogel also discovered the jump, not knowing of Rudy and the other people. [1]

Romero has confirmed in a reply to Adam Williamson that the trick was inserted deliberately:

Here's the answer, straight from The Man who mainly designed E1M4, Tom Hall: "Heeeeeeeeeee. Yeah, I'm pretty sure. :) But not sure if you can get to it.... it stops before it gets to the stairs now...so I think you'd have to get propelled backward somehow... so long ago though...
I totally forgot that this was in episode 1...man, I should play it again...yeah, like I have time..."
So... i think he *did* design it for a shortcut.
John Romero

Using strafe 50, it is possible to jump across the 192-unit gap in the exit room, completing the level without any keys at all. This trick was created by Adam Hegyi and first submitted on June 8, 1999. [5] The time was subsequently refined to 0:13 by Jonathan Rimmer [6], and ultimately to 0:12, believed to be optimal, by Hegyi. [7] However, Andrey "entryway" Budko reached 0:11 in his tool-assisted run of the episode, using strafe 50 throughout the entire map.

Because a tiny error in the player's angle can cause the jump to fail (the maximum possible distance of such a jump is 194 units), it is considered too risky to use in an episode run.

The gap can also be crossed without strafe 50, by rocket jumping. Due to the detour involved in grabbing the rocket launcher (and the soul sphere, in order to survive the blast), this only saves time in the NM100S style.

If none of the above tricks is used to bypass the blue key, the time of a straight speedrun is largely determined by how well you dodge monsters in the maze, especially as you enter the yellow key room.

By opening the yellow door before pressing the switch, you can run onto the exit bridge from the side as it rises.

UV max and UV -fast runs generally use this route:

Anders Johnsen credits Peo Sjöblom with inventing the route. [8] The use of rockets is remarkably consistent from one Compet-N entry to the next: two in the green rectangular room (to kill the two Demons), two or three in the blue computer room, and the rest in the maze. In an episode run, the very first step is of course redundant, but is usually done anyway to draw a crowd of monsters to the south end of the green rectangular room (for more infighting and more efficient use of blast damage).

The efficient use of barrel frags can greatly reduce the time of such a run. (Therefore, clear the blue computer room from the south side.) Some luck is also required, since stray monsters can easily be left behind in the two passages overlooking the green rectangular room.

It is possible to jump over the slime river by straferunning. This saves a small amount of time in runs requiring 100% kills, by making it easier to avoid exploding barrels on the way to the rocket launcher.

In NM100S, the shortest route from the soul sphere to the large round room is to jump down into the green rectangular room, then immediately turn left. For episode runs, many players instead use the slime river to conserve health.

UV Tyson runs are somewhat faster when there is a lot of infighting in the green rectangular room (including monsters from the blue armor room) and near the blue door.

UV pacifist runs tend to use the same routes as UV speed runs.

E1M4 was started by Tom Hall and finished by John Romero. Primitive versions appeared as E1M7 of Doom 0.4 and E1M7 of Doom 0.5. It may have been based on the "Enlisted Quarters" in episode one on the Doom Bible, as early versions of the map from Doom 0.4 contain locker rooms and showers.

The version of E1M4 in Doom 1.0 contained a swastika-shaped structure (see the map to the right), inserted in homage to Wolfenstein 3D. The symbol was changed to a shape that only loosely resembles a swastika for version 1.4, as John Romero has commented [9]:

"Yes, [in Commander Keen 5] there is a swastika in one of the levels, one of my levels to be exact, but I removed it shortly after the game was released because people were upset that an evil symbol was in a cute kid's game (the changed version is in the screenshot). It was a premonition of things to come, namely, Wolfenstein 3D. I also put a swastika in Doom's E1M4 as a Wolf3D reference, but I changed it later for the exact same reason."

The music for this level is inspired by the track "Rise" by Pantera.

The first Doom novel references the swastika-shaped structure, when Fly discovers "several Cray-9000" computers had been placed together to create "a freakin' swastika". He was unsure whether it was created by the alien invaders as a scare tactic or as a joke by certain UAC workers.

In Doom (2016), a reference is made to this level in the second Decoded Codex entry for Resource Operations. Employees of UAC are urged to "submit suggestion form WAD-E1M4 to [their] Command Controller" if they have any suggestions on how to improve working conditions within their facility.

This page uses content from Wikipedia. The original article was at E1M4: Command Control (Doom). As with Doom Wiki, the text of Wikipedia is available under the GNU Free Documentation License.