E1M3: Toxin Refinery (MAP03 in PSX/Saturn/Jaguar/3DO/GBA/32X) is the third map of Knee-Deep in the Dead in Doom. It was designed by John Romero and uses the music track "Dark Halls". The par time is 2:00.

This level contains a secret exit leading to E1M9: Military Base.

From the start point (A), go through the first door and turn left. Follow the path along to the next door. Go through this door and bear right. Walk straight on, through another door, and turn right into a room with a donut-shaped walkway above some slime with 3 Shotgun Guys, 3 Imps, 2 Demons and 2 Zombiemen (B). Travel to the opposite side of this area and past some computers killing 3 Shotgun Guys, a Demon and a Zombieman. Turn left and follow the passageway along until you find a blue key and 2 Zombiemen (C). When you pick this key up, the lights in the passageway will turn off.

Return to the large room just north of the start point. There is a blue door here; go through it and kill 2 Imps, 4 Shotgun Guys and 4 Zombiemen and enter one of the passageways on the opposite side of the room. You should now find yourself in a large room with pillars, 5 Zombiemen, and 7 Shotgun Guys (D). Walk into the central section and some stairs will begin to rise up. Go up the stairs, kill 5 Imps, and go into the exit room (E). Press the switch.

Open the door in front of you. Kill the 4 Shotgun Guys,4 Zombiemen, a Demon, a Spectre, and an Imp in here, and go left, following the hallway into a door. When you open it, shoot the barrel to see those 2 Zombiemen go to waste. Go right up the stairs, and take a left, going down some stairs. Down here, kill the 3 Shotgun Guys and 9 Imps to your left. When they are all dead, go left where they were and hit the switch.

Go back upstairs and to the right. A new passage in this room has opened. Go up the stairs, killing 8 Shotgun Guys, 2 Imps, 2 Demons and a Spectre in your way. Leave the room once you do (down the stairs), and go back up. As you are getting up the stairs, you should hear the sound of an elevator. Here's a little map where the sounds are coming from:

Say the X is you. The sounds are coming from A1, and A2, which are the platforms in front of the "computer wall". Run to A2 first (get on the platform that dropped, and walk to the "computer wall" and it should open. Go downstairs, and kill 3 Imps there. Hit the switch on the pillar and get the soul sphere when it comes down. Go back, exit A2, and run to A1, and do the same thing as last time. When it does open go straight, kill a Shotgun Guy and 3 Imps here, and get the rocket launcher and armor. Go right, jumping in the toxic river, entering the slime tunnel.

When you get to the end, hit the switch, get the backpack, and check the walls to the right of the switch until the door opens. Go inside, get all the goodies in here, hop on the elevator, and check the wall at the end of the room, and it should open. Grab the stuff in this room, and take the lift down, and go back up the stairs from this familiar room. Go right again, open the door, and cross the new bridge made. When you get to the wall, it should open.

Walk up and kill the Imp in front of you, and walk straight, and the wall should open, revealing 3 Zombiemen and 3 Shotgun Guys. Kill them all, walk straight and another wall should open, revealing 5 Imps. Kill all of them, and go into the room they came out of. In here, go through the opening, and follow it to the exit door. Open it. In here, check the wall to your left, and it should lower like a lift. Get on it, and ride it to the top. Kill the Imp up here, and get the box of rockets.

Now turn back around and drop down to the exit room. Down here again, hit the exit switch (this takes you to the secret level).

On your way to the donut-shaped walkway, you will see a recessed panel to your right (K), indicated by blue lights and a short step with a health bonus on it. Activate this wall to open a secret window, which allows you to look into one of the traps in front of the secret exit (containing barrels and zombies).

If you fall off the outer edge of the donut-shaped walkway, or into the slime pit in the first room, you cannot get out. Be careful.

If you fall into the center of the donut-shaped walkway, run to the small patch of concrete at the west end. Press the switch there, and the floor of the pit will rise to the level of the walkway, setting you free again. The first shareware release of Doom, v1.0 was slightly different; the pit could be raised by a switch on one of the eastern walls, or by simply falling into the pit. This was changed for later versions by John Romero, as it was possible to use both methods to raise the pit above the level of the surrounding floor.[1]

When you take the blue key, a door will open in the north wall of the room (R), revealing an Imp (I'm too young to die and Hey, not too rough), or three Imps (Hurt me plenty), or four Imps (Ultra-Violence and Nightmare!). Be ready with the chaingun or the rocket launcher, so you can kill them all before they step into the dark area. It is also possible, if you move slowly enough, to pick up the key without triggering the trap.

In the area with the switch that opens the computer room, the north wall is really a lift (S). There is a green armor on the lift and a shotgun at the top.

The yellow key is located in a short passage through the center of the computer room (T). You do not need it to complete the level.

Re-entering the computer room from secret #1 or secret #2 causes both ledges to lower.

Sector 7 (the large room just below the normal exit) is not "closed", because linedef 927 originates along the body of linedef 933 rather than at its endpoint. As the sector is not tagged, however, this error has no observable effect during normal play.

Looking out into the courtyard from the invisibility area may reveal two slime trails (see screen shots below).

When looking through the window at secret #1, a slime trail may be visible to one side (see screen shot below).

There are 4 known anomalies in this level's REJECT table. 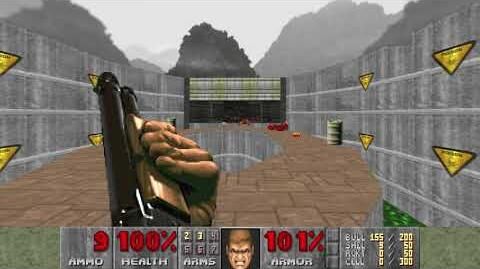 Passage to computer room, and the switch that opens it

Traps in front of the secret exit (secret #6)

Soul sphere on a column (secret #1)

Cache behind the yellow door (secret #5)

The courtyard in secret #5

Side wall of entrance to computer room

The pit-raising switch, present only in the initial shareware release.

When raised with the switch, the floor has an incorrect texture (this is fixed if the floor is raised by falling into the pit).

Due to the large number of Sergeants on this level, even a straight speedrun requires the player to obtain a shotgun in the first room and use it frequently. In NM speed mode, the green armor behind the blue door also helps in surviving the crowd of Sergeants next to the rising stairs. Many players believe that luck is the most important factor in a successful pacifist recording (namely, taking small amounts of damage when the Sergeants do hit you). [1] [2]

In a run to the secret exit, two key maneuvers involve barrel frags: killing as many monsters as possible near the computer room switch, and destroying the barrel near the northeast wall of the computer room with one shot to avoid being surrounded.

A very fast, but very dangerous approach to the donut-shaped walkway is simply to race around the extreme outer edge without bothering to kill any of the monsters first. (With fast monsters, there will probably be a lot of infighting in this area anyway.)

For styles requiring 100% kills, the most popular route seems to be:

Anders Johnsen credits Kai-Uwe Humpert with inventing this route. [3] Xit Vono has modified it to speed up Tyson runs [4], going directly to the blue key in order to get the chainsaw as quickly as possible, then starting again with the first room, using the chainsaw almost exclusively (except perhaps on large groups of Sergeants).

The standard max route is still the most efficient for episode runs, despite the player's already having a backpack and a chaingun. Most Compet-N players also get the soul sphere in secret #1; part of the time thus lost can be recouped by being more aggressive in the passage to the computer room, and less concerned about blast damage near the secret exit. In a Tyson run, the chainsaw on the previous level makes the above modification unnecessary, but you may want to clear the donut-shaped walkway before you try jumping onto it. [5]

NM100S recordings generally use this route:

This is faster than the UV max route because secret #7 is much closer to the exit switch than secret #5 is. The soul sphere in secret #1 is important for surviving the trip to the blue key and back. The health and armor behind the yellow door also help in surviving the traps before the secret exit; as it turned out, the current record holder did not need them, but he would have fallen to 10% health. In an episode run, some players stop for the medikit in the donut room [6], and the rocket box in secret #7 later proves indispensable.

When exiting the chaingun room, firing rockets at the wall above the green armor helps clear a path through any respawned monsters, even though they cannot be seen.

In UV -respawn runs, monsters in the first few rooms can easily be killed twice because those rooms are centrally located. This allows the player to save time by ignoring the monsters in secret #1, the invisibility room, or even the group of Sergeants near the normal exit.

UV pacifist runs to the normal exit tend to mimic UV speed runs, but the secret exit cannot be reached in this manner due to the crowded passage leading to the computer room. These Sergeants must be cleared away very methodically using monster infighting (which requires emptying the first room and the switch area also). The soul sphere then aids the player in surviving the rest of the route.