E1M1: Hangar (MAP01 in PSX/Saturn/Jaguar/3DO/GBA/32X) is the first map of Knee-Deep in the Dead in Doom. It was designed by John Romero and uses the music track "At Doom's Gate".

At the start, there is a Health Bonus to the left and right of you. Go straight and enter the room to the left, and beware the 4 Shotgun Guys on skill levels 4 and 5. Take their shotguns, including the Security Armor, health and armor potions too. When you are done, leave the room, and head left into the opening, and go through the door.

Kill the 3 Zombiemen in this room, and watch out for the 4 Shotgun Guys on skill levels 4 and 5(a 5th one might even come from the next room so be aware). When this room is empty, collect all the items and ammo here, and go through the opening at the east part of the room.

Kill the Shotgun Guy, the Imp, and 4 Zombiemen here, and get the health, and go to the exit door. But before you go into the exit room, go back to the zigzag room (again). Remember that platform that had the Imp(s) on it? It's now been lowered. Go into the new room that was behind the platform, and get yourself a shotgun on skill levels 3 and below, with a box of shells and health, and a Shotgun Guy on skill levels 4 and 5. Back up to the north end of the zigzag room and run all the way back to where you grabbed the shotgun. The top-left corner in the room is lowered briefly. Try to catch it. At the top is a small walkway with some health points, armor points, and some shotgun shells. Grab them all (although by this point you are probably full on shells). Drop out of there at the end. Now, go back to the exit door, open it, kill the Imp, grab the items, and hit the exit switch.

Slime trails may be visible in the following locations (see screenshots below):

There are 7 known anomalies in this level's REJECT table. 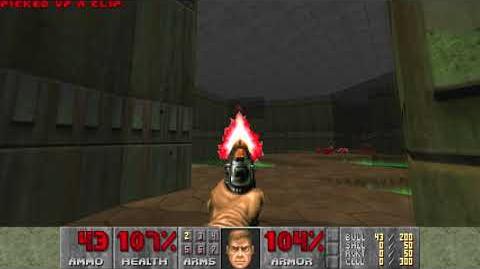 Staircase leading to the green armor

Looking back down from the armor platform

Viewing the courtyard through a window

Blasting a Sergeant behind the computer room

Watch for Imps on balcony

The blue armor in the courtyard

Zig-zag room from above (secret #3)

Smaller trail within the zig-zag room

For a straight speedrun, the simplest path through the map is also the fastest one, and there are no tricks. However, the route through the outdoor area is often used in episode runs since this gives a blue armor (which helps to survive E1M3: Toxin Refinery) and an easy shotgun (needed for E1M2: Nuclear Plant). This takes 3 extra seconds, and is typically avoided in TAS episode runs, wherein a shotgun is instead obtained by taking down a Sergeant in the zigzag room on the fly.

Whereas Doom Done Quick uses the route through the courtyard, Doom Done Quicker uses the TAS route, which Adam Hegyi managed to play in 0:09. According to the text file, it "is an incredibly hard run due to the timeloss inevitable in getting a shotgun and the fact that 0:09 is a borderline time here in any case".

Although 0:09 is human-optimal for UV speed, a built demo in 0:08 has been created by Jonathan Rimmer. The same time has been reached by Juho "ocelot" Ruohonen in no monsters mode. In both cases, strafe 50 is essential.

Because E1M1 is small and sparsely populated, speed records can often be set in pacifist style. (This is more difficult with fast monsters, of course.)

When recording in a style which requires 100% kills, some players use the route through the courtyard because it arouses many of the surrounding monsters sooner, encouraging infighting.

When recording in a style which requires 100% secrets, it is useful to leave one or two enemies alive in the computer room. With luck, you can open secret #2, return to the zigzag room, then step into the shotgun alcove just as a monster walks out of the computer room and triggers the elevator leading to secret #3, saving you several seconds.

In the Doom Bible, the original design document for Doom written by Tom Hall in 1992, the first level of Episode 1 of the game was supposed to be a spaceship hangar called Hangar 2. It is described as fallen to disuse, and now serving as a storage for used up equipment and junk. In one of the rooms the soldiers play cards in their free time. Unlike E1M1 in the released game, this hangar was supposed to be carved into the wall of a canyon. The Doom v0.4 alpha version featured an initial level based on the concept of Hangar 2 as described in the Doom Bible. It was, however, later redesigned to become E2M7:Spawning Vats in the released game.

E1M1 showcased the new capabilities of the Doom engine, such as different height levels that can be reached with the help of stairs or lifts, windows through which you can see outdoor areas and the sky, non-orthogonal walls and environment hazards like the nukage pools.