Exultia (Slayer Gate)
Super Gore Nest
The Dread Knight is a brand new cyborg demon to Doom Eternal. A cybernetically enhanced version of the Hell Knight, it has access to a wider range of attacks and sports dual energy swords.

A variation of the Hell Knight breed, the Dread Knight has been modified and hardwired for aggression. Armed with exo-prosthesis powering energy-blade augments, the Dread Knight is the lethal result of UAC Cultist engineering. Epinephrine regulators modulate the Dread Knight with an unbroken flow of rage-addled adrenaline, while its endorphin receptors have been synchronized to respond with the use of its arm-mounted blades. With each kill, the Dread Knight is injected with a flood of artificial dopamine. As a result of its augmentation, the Dread Knight is driven by a biochemically engineered state of pure, unbroken rage - suffering for which respite can only be found in the act of the kill.

The Dread Knight looks vaguely similar to the Bruiser in Doom 3. It is a dull brown Hell Knight augmented with cybernetics, including silver metal plating and orange-yellow tubes. Its arms have been completely replaced with mechanical limbs, each being able to project a blade of energy just above its wrists. Its head is mostly plated in metal, and its eyes glow a deep red instead of the yellow of its unaugmented counterpart.

The Dread Knight is behaviorally similar to the Hell Knight, rushing the player down and performing powerful area-of-effect attacks. However, it also has some new tricks up its sleeves to help cover the Hell Knight's weaknesses. Similar to the Baron of Hell, it is able to launch a beam of energy at the Slayer from a distance, allowing it to keep pressure on him even out of melee range. It also has a wide-ranging slash attack to make close-range strafing more difficult, and its ground-pound attacks coat its surroundings in orange energy, damaging anything in it for a few seconds. It is notably much bulkier than the Hell Knight, serving as a middle ground between it and the Baron.

The Dread Knight is one of the most dangerous threats in the game up close, and putting as much distance as you can between it is highly encouraged. Fortunately, it's a little slower than a Hell Knight, allowing the Doom Slayer to outmaneuver it more easily; while it can still launch energy waves, these are comparatively easy to dodge compared to its melee attacks. Additionally, it shares the same weakness as the Hell Knight and Baron of Hell; concentrated Chaingun fire halts its progress while tearing through its health. If the Chaingun isn't available, one Lock-On Burst from the Rocket Launcher can put the Dread Knight into a stagger state, making killing it much less of a hassle. Otherwise, one should use their dash frequently to avoid its powerful attacks and constantly chip away at it from a safe distance. 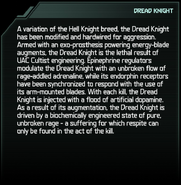 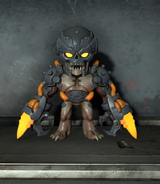 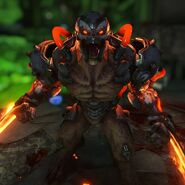 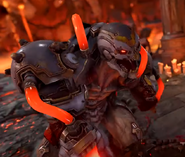 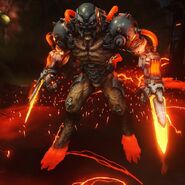