Doomguy 2000 is an infamous author and notorious troll best known for Doomguy's Warzone and 30,000 Levels. He is also known for making purposely bad joke WADs to irritate people, or in this case trolling. Other examples of these joke WADs include: The Worst Level Ever Made, The Most Impossible Difficulty Ever!!!!!, and Seizure Doom to name a few. Besides being banned from the Doomworld Forums, he considers negative attention to be synonymous with popularity. Currently, he runs this wiki under the alias Justice Infinity. 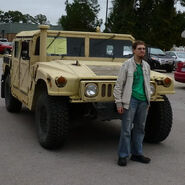 Doomguy 2000 standing next to a Humvee.