The final version of Doom 3 was supposed to look like the alpha version if the E3 demo wasn't leaked. The weapons that weren't placed into levels used Quake III models as placeholder. The three levels were based on some early designs of the final version.

e3_1
based on an early concept of the recycling plant mostly the atmosphere, where the Marine discovers the consequences of the Delta Labs experiment gone wrong.
e3_2
a mix between the EnPro and CPU complex and the player must get past the commandos and replace the extraction canister.
e3_3
an early version of the Alpha Labs with influences of sectors 1 and 3. It ends with the Hell Knight eating the Marine's head. If the game was finished the hell knight was to be some kind of mini-boss. If defeated the player would exit the Alpha Labs.
e3_intro
the intro movie which is really a map but both depicts early versions of Mars City and Delta Labs.

A Commando smells the player's fear.

The infamous Demon intro scene which was cut from the game. 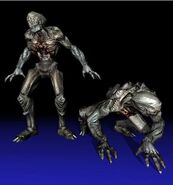 An Imp attacking the player.

A joke texture put on shelved boxes.
Add a photo to this gallery

On the Mars Research Facility, a scientist walks between a couple of guards. He goes to the communications room and says that the stabilization field has a problem. Another scientist says: "There's nothing to worry about". Moments later, the base shakes. The Delta Teleporter fails and opens a gateway to Hell. Many Lost Souls come from the gateway. Two Lost Souls transform a Mars-Sec, and his skin begins to turn green and his eyeballs explode. They mutate into two Z-Secs and go around the base. There is shown an Imp watching a corridor, an image of a man trapped, and a type of pentagram appears. After that, the marine comes from an elevator. He goes around the area killing the transformed personnel. Moments later, a Hell Knight appears. The marine hides and the Hell Knight doesn't notice him. The marine goes to the upper levels and is attacked by a Pinky. After shooting it down, he spots some more powerful transformed commandos. He kills many of them and goes upstairs to the Alpha Labs. Seeing the corpse of a janitor, he goes to a service, and sees a Pinky eating another janitor. He kills the Pinky and the still-alive janitor. He then is attacked by many Imps. When he is about to leave the Alpha Labs, he realises that the exit is blocked. The marine turns around and sees a Hell Knight is behind him. The Hell Knight crushes the marine, then he rips off his head and eats it.

Retrieved from "https://doom.fandom.com/wiki/Doom_3_alpha_version?oldid=116969"
Community content is available under CC-BY-SA unless otherwise noted.