For information on the second Doom film, see Doom: Annihilation.

The film is closer in style to the horror game Doom 3 rather than the original action games, Doom and Doom II: Hell on Earth. It is likely that the success of Doom 3 played a part in prompting the eventual production of the film. The film's design also featured the involvement of id Software, helping to ensure that things looked "authentic". Every monster and weapon in the film is Doom 3 style. Pinky, however, has wheels for hind legs, instead of mechanical hind legs and the BFG9000 looks more like a real life gun. The Doom 3 version of the BFG9000 looks more like a Halo Assault Rifle.

In a September 2005 interview, executive producer John Wells suggested that a second Doom movie could be created if the first was a box office success. The film's production budget was $60 million. It received mostly poor reviews, eventually settling at 19% on Rotten Tomatoes's Tomatometer, and grossed $28 million domestically and $56 million worldwide at the box office. Due to the film's failure, a second Doom movie was eventually cancelled. However, a second film was in the planning stages by 2018.

Olduvai Research Station on Mars has been shut down and placed under quarantine, for reasons that are unclear but ominous. No one is allowed in or out except the Rapid Response Tactical Squad, a heavily armed marine special forces unit dispatched to handle the problem. The RRTS are lead by the cool, calm, and collected Sarge, with John "Reaper" Grimm. serving as his second-in-command. Reaper has a special interest in this mission; his sister, Dr. Samantha Grimm, is one of the research scientists on Olduvai. The team travels to Mars through a wormhole originally discovered by the Olduvai workers, named the Ark. They are greeted by a technician named Pinky, who informs them that when emergency alarms were tripped, the Ark was sealed off from the rest of the base, in order to make sure the teleporter was not compromised.

Upon entering the quarantined area, the Marines discover members of the science team who have changed into hostile zombie-like monsters. Some of them have mutated even further, becoming creatures resembling Imps. Although the creatures attempt to infect some of the remaining humans, others are killed outright. After several Marines are killed, Sarge demands to know more about the research being conducted at the station. Samantha eventually reluctantly explains.

Excavations at an archaeological site have revealed the remains of an ancient Martian race. Although more or less human, they were technologically advanced, and apparently performed research into genetic manipulation. The result was an artificial 24th chromosome, which integrates itself with the subject's existing DNA. The purpose of the new chromosome was to transform individuals into superhumans, with enhanced strength, agility, and endurance. The Olduvai scientists experimented with the chromosome, injecting it into convicted murderers. However, instead of becoming superhuman, the test subjects transformed into hideous monsters, and the scientists lost control of the facility.

Samantha has come to the conclusion that what the chromosome does to a person depends on whether or not that person has certain tendencies; essentially coming down to whether they are inherently "good" or "evil"; good people become superhuman, as planned, but evil people become mindlessly violent monsters, who instinctively "infect" other evil people with the chromosome and murder good people. It was an outbreak of the monsters that ultimately lead to the destruction of the Martian civilization thousands of years ago. When the Marines fail to protect the wormhole, they must pursue the monsters back to the underground UAC facility on Earth, and find it overrun.

Sarge decides that they must kill every last human on the base, as they could be infected by the disease, and it must be contained, at any cost. The squad is unaware, however, that Sarge himself has already been infected. When The Kid, the team rookie, refuses to kill a group of women and children who have survived and are obviously not infected, Sarge casually murders him. One by one, members of the RRTS are killed by the infected humans. Sarge is dragged away while Reaper and Samantha escape.

Reaper is seriously injured by a ricocheting bullet and Samantha is forced to inject him with the 24th chromosome, knowing that her brother is inherently good and that the superhuman abilities it brings will heal his wounds. He awakens to find himself alone, and after battling various monsters (including a mutated Pinky, who has, appropriately enough, become a Pinky Demon), meets with Sarge, who is beginning to transform. The two fight hand-to-hand, and Reaper defeats Sarge by throwing him through the Ark - followed by a grenade. Sarge is killed, the portal is destroyed, and the research into the 24th chromosome is trapped on Mars where no one will ever be able to use it for evil. The film ends with Reaper, carrying an unconscious Samantha, riding the elevator from the Ark facility to the surface.

The film stars Dwayne "The Rock" Johnson as Sarge , Karl Urban as John "Reaper" Grimm (the film's version of Doom's protagonist) and Rosamund Pike as Samantha Grimm, John's estranged sister, who is a scientist at the UAC facility. Other characters include Portman, Goat, Duke, Destroyer, Mac and The Kid, who are other marines, and Pinky , another UAC employee.

The Doom movie was criticized on a number of points by most people who had played or were otherwise familiar with the games. Many objections had to do with the plethora of differences between the film and the games:

In addition, the idea of whether a test subject becomes a monster (like Sarge) or evolves to a superhuman being (like Reaper) depends on whether he or she is genetically "good" or "evil", has been criticized as unreasonable, especially considering the fact that virtually everyone else was transformed into a monster; however, that criticism ignores the group of unaffected people executed by Sarge. In addition, Dr. Samantha Grimm's statement about "good" and "evil" were rooted in the biochemistry of the individuals, which has a scientific basis as the acts we would consider "evil" and the individuals' likeliness to commit them are known to have genetic (essentially chemistry) factors. One could also argue the many individuals working there had genetic predispositions to psychopathic behavior as the environment was risky (psychopathy is correlated with low anxiety) and involved questionable experiments. Epigenetics might have been another cause too, in which the environment affects gene expression. Various arguments, such as the actual existence of a soul, have been made, none with substantial evidence to fully end the debate. Ryan Davis of Giant Bomb commented in a review of the film that the idea of good or evil genetics is no less "silly" than the idea of a demonic invasion of Mars, making it unclear what exactly the writers intended to accomplish.[1]

It is believed that all of these points contributed to the film's box-office failure, and its rejection by fans.

A movie based on the series has been widely expected since the original game's publication in 1993. In 1994 or 1995, id Software sold Doom's movie rights to two studios, reportedly Universal Pictures and Columbia Pictures, but the rights expired (apparently due to a lack of timely production). In 2002, it was reported that Warner Brothers had acquired the rights, which were subsequently lost and then given to Universal Pictures in 2003. Universal moved the film into production in 2004.

The film's score was composed by Clint Mansell. A remix of the Nine Inch Nails song You Know What You Are? appears at the beginning of the first person shooter ending credits. Switchback by Celldweller was used in the trailer.

This page uses content from Wikipedia. The original article was at Doom (film). As with Doom Wiki, the text of Wikipedia is available under the GNU Free Documentation License.

DVD cover (region 2)
Add a photo to this gallery 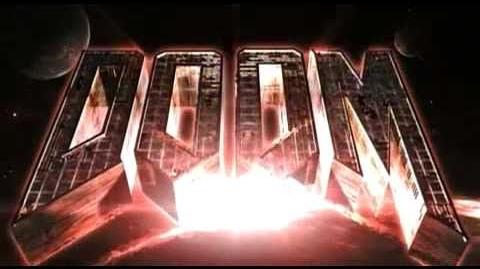 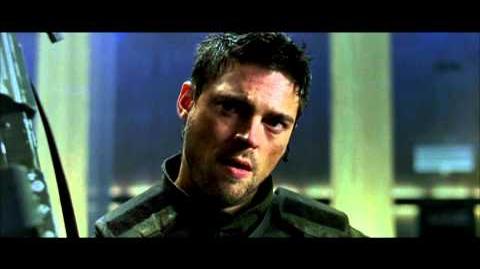 Doom Trailer
Add a photo to this gallery

Retrieved from "https://doom.fandom.com/wiki/Doom_(film)?oldid=125479"
Community content is available under CC-BY-SA unless otherwise noted.