The Pinky is a returning enemy to Doom Eternal. They make their first appearance early in the game, at the Doom Hunter Base.

The Pinky retains its armored front from Doom (2016), being able to endure a very high amount of damage from the front, but with a defenseless rear end leaving it vulnerable to damage.

As Hell emerged on Earth the Pinky began to appear on terrestrial soil in great number, rapidly becoming the bane of existence to ARC military fortifications. Utilizing its armored frontal carapace, the Pinky is able to penetrate defensive encampments, breaking through walled defenses and using its ramming ability to upturn and immobilize armored vehicles. ARC deployments, dependent on their ability to hold the line against encroaching forces of Hell, could be disrupted and even overtaken by a single Pinky, were it able to penetrate and break through their defensive matrix. allowing a greater demon influx to pour in after it. The ARC rapidly prioritized the target status of the Pinky, issuing high-range bombardment to prevent the Pinky from gaining proximity.

The Pinky maintains a similar look to its appearance in Doom (2016), with an armored carapace covering the front of its body, legs, and head.

For the most part, the Pinky behaves identically to its appearance in Doom (2016). However, its armored front has become much tougher, with the Pinky being capable of taking Super Shotgun blasts and Ballista bolts to the face without much issue. It also turns around to face the player after missing a charge much faster than in the previous game, making their rear weakness more difficult to hit. In enclosed spaces and tight corridors, this makes the Pinky more dangerous than ever.

However, they also possess a few new weaknesses. The Ice bomb can freeze a Pinky in its tracks, leaving its rear weak point exposed and allowing for an easy kill. Additionally, the Pinky has a notable weakness to the Blood Punch, being killed in a single strike of the Slayer's fist, even from their armored front. When charging, the Pinky has a low turning radius, so a nimble Slayer can use a well-timed dash to dodge the stampeding demon and attack its weak-point before it can turn around. Alternatively, the Slayer can double jump over the Pinky and fire on it from above as it runs past. The Pinky takes a higher amount of damage than normal demons when shot from behind, so a couple of well-placed shots from most weapons should be able to bring it down. 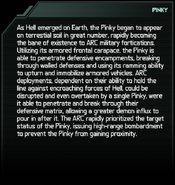 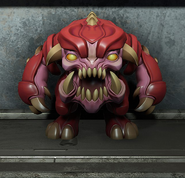 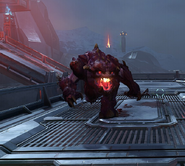 A charging Pinky
Add a photo to this gallery
Retrieved from "https://doom.fandom.com/wiki/Demon/Doom_Eternal?oldid=134222"
Community content is available under CC-BY-SA unless otherwise noted.