The Cyberdemon is a boss in Doom II RPG. In this game it has two bionic legs, and one cannon arm.

It can be taken out fairly easily with the Soul Cube.

The Cyberdemon is depicted with two bionic legs in this game, due to the limitation of the game's animation system--each character's legs are required to be symmetrical in design, as the leg sprites (which are separate from the torso and head sprites) are simply mirrored horizontally to create the full set of animation frames for walking. Although the artwork was created depicting the Cyberdemon with one "normal" leg and one bionic leg, it was not used in the final game for this reason.[citation needed] 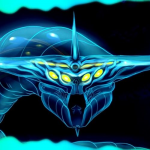