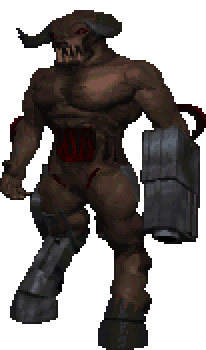 The Cyberdemon appears in Doom 64.

The Cyberdemons of Doom 64 are the resurrected carcasses of those from Doom 1, resurrected by the Mother Demon. They are made from systematically altered dead carnage remade back into corrupted living tissue. The mutations were devastating. The demons have returned stronger and more vicious than before.

Half machine, half raging horned devil. This walking nightmare has a rocket launcher for an arm and will definitely reach out and touch you. Make sure you're fully loaded before you take on this guy.

It has not gone through many changes and mutations except that it has darker colored skin, a more bovine-esque head structure (though its face is very canine-like appearance), is slightly stronger and much larger, with thicker wiring running along its robotic body parts, and - unlike the PC version - the monster's lower back is also prosthetically enhanced with steel plates to reinforce and sustain its volumous spinal cord.

The Doom 64 version of the Cyberdemon is notable for having the ability to lead its shots, making it an even more formidable opponent; the Cyberdemon's third rocket is usually fired at the player's anticipated position rather than the player's current position. The rockets also leave smoke trails and fly out much faster.

The Cyberdemon's rockets in this game emerge from the rocket launcher itself instead of the middle.

While it has the same death sequence animation as its PC counterpart, for the most part (full-body explosion) it's more elaborate in Doom 64, involving its form stricken with several separate explosions before the body essentially evaporates in a haze of fiery blood, complete with a shot of its skeletal frame vanishing with it.

Cyberdemons are relatively rare throughout the game, appearing chiefly in the secret levels or later in the game.

Retrieved from "https://doom.fandom.com/wiki/Cyberdemon/Doom_64?oldid=140126"
Community content is available under CC-BY-SA unless otherwise noted.