The Cyber Mancubus  returns in Doom Eternal. Similar to its depiction in Doom (2016), it acts as a tougher variant of the regular Mancubus, with slightly different attacks and sporting armor plating.

Mechanized and heavily augmented, the Cyber Mancubus is equipped for frontline warfare. Equipped with dual-barrel arm-mounted mortar cannons, the Mancubus's integrated weapon system utilized the body's naturally occurring biotoxins, refining this corrosive, viscous membrane into toxo-plasmid ammunition feed. Siphoned from the spinal gland and funneled intravenously to the weapon conversion system, the corrosive secretion is discharged by an alternating firing mechanism, which dispenses the toxo-plasmid as either heated projectile or ignited fluid, the latter resulting in a flamethrower-like incendiary spray capable of burning through armored plating.

The Cyber Mancubus has undergone the same bodily redesign as its lesser Mancubus brethren. However, it is also covered from head to foot in gunmetal grey armor, with passive green lighting emitted off of certain sections of its body. Once its armor is removed, it appears mostly identical to the regular Mancubus.

The Cyber Mancubus will behave in a similar manner to its unmodified variant, lobbing powerful projectiles at the Slayer from long distances. Unlike the regular Mancubus, the Cyber Mancubus' attacks will leave behind an acidic puddle that will damage anything entering it until they dissipate. Up close, the Cyber Mancubus will pound the ground and dump a large puddle of acid around it, dealing massive damage if the Slayer is unable to get away quickly enough. Unlike the regular Mancubus, its cannons are no longer a weak point, and its attacks cannot be weakened/disabled.

The Cyber Mancubus' most notable feature is its armor, which reduces damage from all weapons until it has been removed. This armor can be removed either by continuous fire from the Slayers arsenal or instantly removed with a Blood Punch, which will also deal significant damage to the demon. The Cyber Mancubus also lacks flamethrowers, making attacking it from mid-range less of a risk than with the normal variants.

As with the regular Mancubus, a Glory Kill to its chest area will result in it violently exploding, dealing serious damage to all demons caught in the blast radius. 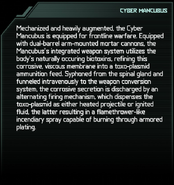 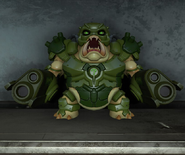 Cyber Mancubus surrounded by its acid.
Add a photo to this gallery
Retrieved from "https://doom.fandom.com/wiki/Cyber-Mancubus/Doom_Eternal?oldid=134368"
Community content is available under CC-BY-SA unless otherwise noted.