Reclaimed Earth
The Cursed Prowler is a demon that appears in Doom Eternal : The Ancient Gods - Part Two. It first appears in the Reclaimed Earth level, with others joining the Dark Lord's army for the final battle in Immora.

A binding cursed of necrotic poison drips from the claws of the Cursed Prowler like venom. Known in Hell to be one of the most treacherous forms of blood magic, only few have the teachings to conjure such sorcery. Yet, Prowlers from the deepest and darkest hellpits have evolved to naturally produce such power from their fingertips. One swipe curdles the blood of their victim and drains them of their essence with each heartbeat. The only way to cease the curse is to cease the caster.

Like most of the new enemies introduced in The Ancient Gods - Part Two, the Cursed Prowler is based on an enemy in the main game: in this case, the Prowler. The main physical difference is that it is primarily green instead of purple, and its claws are coated with bright green poison. The glow of its teleportation and energy shots is also changed to green, making it easier to spot in the middle of a pitched battle.

Cursed Prowlers behave similarly to regular Prowlers, but with the ability to "curse" the Slayer with their melee attacks and projectiles. When cursed, a HUD display will warn the Slayer of such, he will lose the ability to jump or dash while his health slowly drains, and debilitate the Slayers vision; the HUD being surrounded by a dark green hue. He will also be unable to lock onto the Cursed Prowler, but other demons can be targeted as normal, which should make killing the Cursed Prowler easier as you can still Meathook other fodder for quicker traversal.

With these factors in mind, the Cursed Prowler is one of, if not, the most dangerous demon, as it debilitates your vision, movement options, and drains your health over time; making it easier for other demons to overwhelm the Slayer. It is a high priority target, and if left unchecked, could easily turn the tides of a battle in one fell swoop, so it is recommended to be wary of your surroundings, as it is difficult to distinguish the sound cues between a normal Prowler and the Cursed Variant. 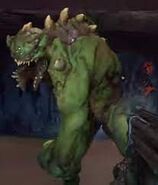