Cultist Base
The Cueball serves as the replacement for the Possessed Engineer from Doom (2016). It is notably also the only demon in the game that both cannot move, and will not attack the Slayer.

Former UAC Engineers, these malformed zombies were rendered inept during the war for Earth. Their bodies are now a disturbing fusion of body, bone, and barrel.

The creature somewhat resembles a Possessed Engineer, but is even more mangled, with a horribly distended belly and multiple gas tanks projecting from all over its body, some spouting flames.

The Cueball will stand in place and do nothing until it is hit. Anything as little as a punch will cause the cueball to go flying in the opposite direction of where it was struck, exploding violently when it makes contact with a wall, the ground, or a demon. The explosion from a Cueball is notably more powerful than a rocket, and if a player sees one standing around, it is recommended to launch it either at a tight cluster of demons or at a more problematic opponent. Splash damage weapons are a bad idea as these can throw the Cueball towards the Slayer's position instead.

Outside of being caught in the blast radius, the Cueball is incapable of damaging the Slayer in any way. Even when standing directly next to it, the Cueball will not react whatsoever.

They are immune to the Chainsaw. 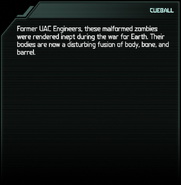 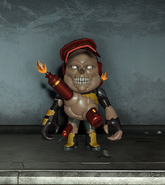 Cueball Collectable
Add a photo to this gallery
Retrieved from "https://doom.fandom.com/wiki/Cueball?oldid=134252"
Community content is available under CC-BY-SA unless otherwise noted.