Cover art refers to the artwork depicted on the cover of a product, whether a box, a book cover or a front sleeve. Each product in the Doom franchise, or in any other franchise related to the Doom games, has its own distinctive cover. The artwork for some products is based on art from previous releases, especially if the newer article is somewhat related to the original in content. Each piece or art displays a picture or design, a logo, and often some product information.

On the Doom cover art, the game's protagonist is standing on a ridge, using a machinegun to fight off hellish monsters who greatly resemble Barons of Hell--one of these monsters is grabbing his left wrist, and another is tossing a ball of fire towards him. Another one of them bears a mechanical arm reminiscent of the Cyberdemon's rocket launcher (a second such mechanical arm, belonging to another monster, is also visible on some larger versions of the cover art, but is cropped off on most versions). Another marine appears in the background, and appears to be approaching the protagonist, hand raised, perhaps to render assistance. The Doom logo is shown over and behind the protagonist. This cover was illustrated by Don Ivan Punchatz.

On the Doom II cover art, what appears to be the protagonist of the series, here showing an unusual buzz cut, is fighting a cyberdemon using the shotgun. The Doom II logo can be seen over and behind the two combatants. This cover was illustrated by Gerald Brom. The manual uses the same art and hence is not shown below.

The U.S. The Ultimate Doom uses the same artwork as the Doom box cover, but shows a dark frame around the picture and "The Ultimate" written on top of the Doom logo. In addition, the protagonist now has a shotgun on his left hand, and a Cacodemon can be seen on the top left hand corner.

The UK The Ultimate Doom features entirely new artwork depicting large face of a red demon that looks resembles a Baron of Hell, not that unlike the monsters on the original Doom's cover art.

The Master Levels for Doom II cover art shows a grey hellish background. The artwork is based on the same graphic as various other pieces of Doom related art, including the texture SKINFACE found in the Doom games, the Doom II texture SKY3 and the Collector's Edition cover art.

The cover art for the Sony PlayStation version of Doom features an all new drawing of the Marine, sporting various injuries and standing over a demon carcass, letting loose a point-blank shotgun blast to a green Imp. A more minotaur-like Baron of Hell is at one side with a Lost Soul and an opening to a dark, cloudy dimension behind him. The "Doom" logo is on the top of the picture. This is used in both the original print (packaged in a larger case) and the Special Edition (packaged in a regular CD case).

The U.K. version of the cover uses a cropped image, showing only the top half of the Imp, Baron and Protagonist Marine. Cutting out the dead Imp, scenery of the outdoors behind them, along with the lost soul and any other imagery, making this version feel more claustrophobic.

The cover art for the SNES version of Doom borrows nearly all its elements from the PC original, but with significant variations: rather than being essentially surrounded, the marine is retreating from a horde of demons approaching from one direction. Unlike the original, none of the demons have managed to lay a hand on him.

The cover art of Final Doom depicts what appears to be the face of an ammo box. Its simpler version of the Doom logo is written in yellow with "Final" on top of it and appears within a diamond shape on the center of the upper half of the design.

The USA and PAL releases of the Sega Saturn port of Doom feature the Doom logo and a lost soul against a black background. The cover of the Japanese release is identical to the PlayStation cover.

The cover art of Doom 64 shows the Demon Artifact affixed on a black background with the Doom 64 logo on top of it. And the Unused version shows a Cyberdemon Approaching The Marine with a Super shotgun, at the front and a Imp was killed by a pistol and on the Bottom was shown a Bulky Demon which resembles The Demon being stomped.

The cover art of Doom 3 depicts a Hell Knight behind the Doom 3 logo.

The cover art of Doom 3: Resurrection of Evil depicts the Maledict under the Doom 3 logo.

The cover art of Doom (2016) depicts the Marine standing alone with the super shotgun. Following some fan outcry, a reversible cover reminiscent of the original Doom was also included in the packaging, featuring the marine in a hellish landscape surrounded by demons.[1]

The cover art of Doom Eternal depicts the Doom Slayer dropkicking a Marauder while surrounded by other various Demons that are seen throughout the game, similar in style to the cover of the original Doom. 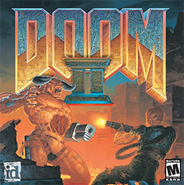 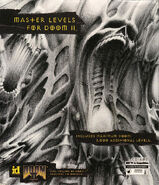 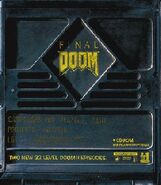 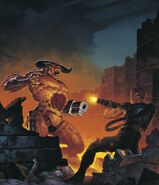 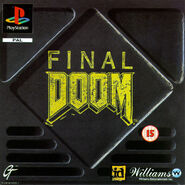 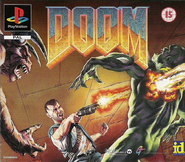 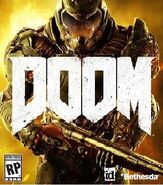 The Doom comic cover art displays its protagonist firing a chaingun at a former human, with corpses of dead monsters lying around.

The Masters of Doom cover features a highly pixelated heavy weapon dude in its firing pose with the player firing at it. The book's name and subtitle ("How Two Guys Created an Empire and Transformed Pop Culture") along with the author's name (David Kushner) are also on the cover.

The cover of Doom: The Boardgame is a modified version of the Doom 3 cover, with the "3" removed from the logo, the Fantasy Flight Games (the game's publisher) logo on display along with the additional "The Boardgame" subtitle under the modified Doom 3 logo.

Doom: The Boardgame Expansion Set cover displays the protagonist from Resurrection of Evil wielding the Doom 3 super shotgun and The Artifact. It also features the same logos and texts as the main Boardgame cover with the addition of the tagline "Expansion Set".

The poster art of the Doom movie features first person perspective of a marine firing at a monster (possibly a hell knight), along with the movie version of the Doom logo.

The cover art of the Doom movie region 1 DVD depicts three space marines (Destroyer, Sarge and Reaper) under the movie's angled version of the Doom logo. This design was also used for some region 2 copies.

The region 2 DVD displays an unknown monster on a steel door with a red version of the movie's altered Doom logo.

The cover of the Doom 3 novel, Doom 3: Worlds on Fire novel, depicts a Hell Knight in a red hue along with the Doom 3 logo over it.

The cover of the second Doom 3 novel, Doom 3: Maelstrom, depicts the Maledict in a blue hue along with the Doom 3 logo over it.

Knee-Deep In The Dead novel cover 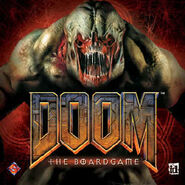 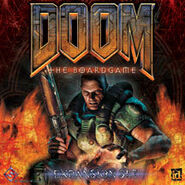 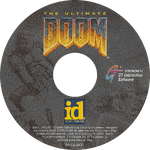 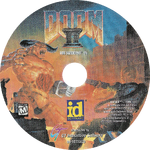 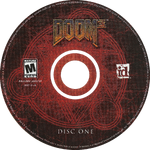 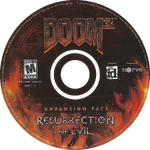 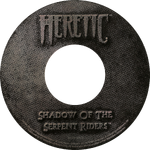 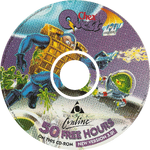 Cover art from other games

The cover of Hacx depicts the game's protagonist fighting a robotic monster, possibly an android.

Strife's cover depicts the Sigil and the Strife logo. 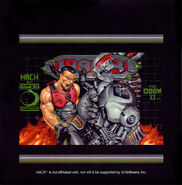 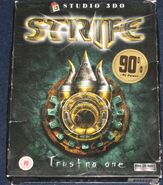