Doom Hunter Base
The Carcass is a new enemy featured in Doom Eternal. A cybernetically modified corpse, it uses a variety of strategies to hinder the Slayer in combat.

The product of inhumane bio-mechanical engineering, the Carcass was created in the remote labs of the Cultist enclave. Neither truly living nor dead, it exists in a state of partial re-animation - its cybernetic armature simulating a living impulse within a decaying organic host. Devised as a means of extending a soldier's usefulness in combat after death, the unliving host can only be destroyed by severing the body from its cybernetic implants.

The Carcass is a decaying corpse cybernetically augmented by Union Aerospace Corporation cultists. Its upper body mostly retains its human features, but the majority of its body has been replaced with machinery. Notably, it now walks on a tripod, with an engine of some kind in place of its stomach, and its right arm hosts a cannon that it uses to project energy walls.

The Carcass is the Swiss Army knife of the demonic Forces in Doom Eternal. It can scuttle around the battlefield at a surprising speed, allowing it to reach a suitable position from which to pester the Slayer. From afar, the Carcass will emit three sonic bursts at the Player, and occasionally pound the ground to send a shockwave attack the Slayer's way. Up close, the Carcass will aggressively spin around, thwacking the Slayer with its legs.

The most notable ability of the Carcass is its projected shield. The Carcass will frequently throw up an energy wall similar to that of the Shield Soldiers to halt the Slayer's movement and block his weaponry. This wall can be quite hazardous, particularly if the player happens to be using a weapon that also has a large amount of splash damage, such as the Rocket Launcher.

Thankfully for the player, this energy wall has the same weaknesses as the Shield Soldiers. Plasma weapons are able to overheat the shield, resulting in anything near the Shield taking hefty damage and leaving the Carcass stunned for several moments. The Carcass itself is also reasonably weak for a heavy unit, able to be killed fairly easily by most weapons. It is best to take it out from a medium distance, as its close-range attacks can quickly deplete a cocky player's health. If it can be tricked into pulling up a shield wall close enough to itself, overloading the shield should kill the Carcass as well, granting the Slayer freedom to focus on other threats. The Carcass is notably weak against the Destroyer Blade of the Ballista; being taken out by one shot and destroy any shield or demon penetrated by the blast. 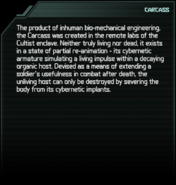 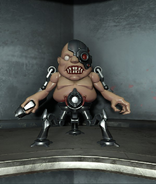