< Cacodemon
View source
watch 02:52
Roblox: DeepWoken - The Loop
Do you like this video?
Play Sound
Sub-Pages:

The Cacodemon returns once again as an enemy in Doom Eternal. While for the most part retaining its design from Doom (2016), it has also undergone some slight design changes to more closely resemble its appearance in the original Doom.

Hunters of the Sloughlands, the Cacodemon lurks the bottomless and murky depths of Hell in search of easy prey. An aimless wanderer, the Cacodemon is mostly devoid of cognitive ability, sensory awareness, and otherwise commonly occurring impulses. Driven only by a singular desire to feed, the Cacodemon is likely to appear wherever there is flesh to be consumed, bringing with it an insatiable propensity for hunger. It is said that the Cacodemon bears some resemblance to the cycloptic titans of ancient Hell lore, leading Sentinel scholars to believe that the forgotten titans may yet live on in some disembodied form.

For the most part, the Cacodemon remains unchanged from its depiction in Doom (2016), retaining its shriveled legs and misshapen underbelly. However, its back spines and teeth have changed from their dirty yellow in the previous game to a more clean white color, and its body is a lighter shade of red. It's green eye now has a pupil, and it now bleeds blue blood, similar to its original appearance in Doom.

The Cacodemon will drift quietly towards the Slayer, lobbing balls of purple plasma at him as it attempts to close distance. Occasionally, the Cacodemon will launch several of these plasma balls in quick succession, which can slow down the Slayer greatly if they all hit. When in close range, the Cacodemon will crunch the player, dealing an alarmingly high amount of damage. The Cacodemon is also surprisingly bulky, capable of taking hefty amounts of damage without a flinch.

Fortunately, it also has several easy to exploit weaknesses. The most obvious being its mouth. If the player uses a frag grenade from their Equipment Launcher or the Combat Shotgun Sticky Bomb mod, they can lob an explosive into the Cacodemons gaping maw. Doing so will result in an immediate stagger, allowing for an easy Glory Kill. Alternatively, using the Ballista can kill it easily at range, owing to the weapons increased damage output against flying foes. The Arbalest mod on the Ballista will one-shot a cacodemon. 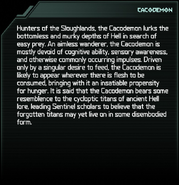 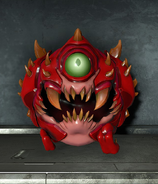 A Cacodemon about to bite the Slayer
Community content is available under CC-BY-SA unless otherwise noted.
Advertisement