View source
watch 02:52
Roblox: DeepWoken - The Loop
Do you like this video?
Play Sound
Sub-Pages:

"They float in the air, belch ball-lightning, and boast one Hell of a big mouth. You're toast if you get too close to these monstrosities."
― Doom & Doom II manual description

The Cacodemon appears in both Doom RPG and Doom II RPG as a class of monster. There are three variations, identified by color:

Cacodemons attack three times consecutively and are most weak against axe attacks and plasma blasts.

"Cacodemon" or "cacodæmon" comes from Ancient Greek and means "evil spirit"; it had entered Old English by the 12th century. In ancient Greek, "demon" or "dæmon" simply meant "spirit" and was neutral; the latter spelling (usually with the ligature separated into "ae") still has neutral uses to this day. 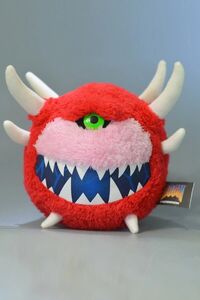 On September 5th, 2013, Gaming Heads released both a Cacodemon and Pain Elemental for purchase on the Bethesda Store.[1] In the final video of John Romero's playthrough of the first episode of Doom with JP LeBreton on "Devs Play," these plushies are visible on his mantle.[2] Gaming Heads went on to release the Doomguy ("Doom Space Marine") as the third available plush.[3]

This page uses content from Wikipedia. The original article was at Cacodemon. As with Doom Wiki, the text of Wikipedia is available under the GNU Free Documentation License.
Español
Community content is available under CC-BY-SA unless otherwise noted.
Advertisement