Mars Core
A new breed of Baron of Hell (also known as Hell Princes or simply Barons ) is present in Doom Eternal called Fireborne Barons. Despite being a different breed according to the Codex, they are fundamentally identical to the 2016 Barons, but with an altered color scheme, as well as being stronger (being able to survive a single BFG shot) and having a more aggressive AI, making them tougher to take down.

The Ancient Gods - Part Two introduced a variant of the Fireborne Baron called the Armored Baron.

The Fireborne Barons have evolved, the descendant clan of the Baron hell breed, and are indigenous to the caustic, scorched hellscapes bordering the Burning Abyss. A landscape of cragged spires forged from unbreakable Blackstone, tempered by the crashing waves of the magmatic tide, these sulfuric planes of Hell have long served as banishing grounds - a place of the exodus to which the damned are sentenced as their final destination. The Fireborne Barons have evolved in this environment, sustaining themselves on the remnants of the damned, growing obsidian carapaces and in time becoming infused with the very incendiary matter of Hell itself.

The design of the Fireborne Baron is very similar to the 2016 Baron, being a muscular, goat-legged demon with a build similar to that of the Hell Knight from Doom 3. The main difference is that its body has become grey with thin, glowing red cracks, giving it the appearance of recently-cooled magma. It also has a large fiery blade emitting from each forearm, similar to the energy blades of the Dread Knight. When damaged in battle, its stony "skin" breaks away, revealing a skeleton engulfed in a bright, magma-like glow.

The Fireborne Barons function nearly identically to their Doom (2016) counterparts, but with even more strength and durability; they're able to withstand one BFG shot, and are completely immune to the chainsaw (owing to them requiring five pips in the previous game, and Eternal's chainsaw only having three). On the other hand, the Chaingun and Rocket Launcher are now more effective than ever in dispatching them (similar to the classic games), due to their ability to stagger the Barons and prevent them from attacking.

Interestingly, during the encounter with a Fireborne Baron in the QuakeCon Phobos footage, the player was able to repeatedly knock back and stun the Baron with melee attacks. Whether this was a cut mechanic or an early version of the blood punch is unknown, but is not possible in the final game.

The Baron of Hell's model in the Collectible Viewer 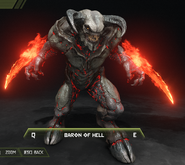 The Baron of Hell model, this time at a slightly different angle 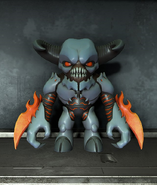 The Baron of Hell collectible figure in the Collectible Viewer

Artwork of the Baron
Community content is available under CC-BY-SA unless otherwise noted.
Advertisement