The BFG 9000 makes a powerful comeback in Doom Eternal, found on the Phobos Base as the main power source of the BFG 10000 superweapon, which is part of the anti-demonic defence grid and is used by the Doom Slayer to shoot a hole into the surface of Mars. In gameplay, it is observed that the reticle will also feature a counter for the amount of enemies killed by the oncoming blast. Additionally, it has moved to the weapon wheel, replacing the Pistol of Doom 2016. Due to the Unmaykr using the same ammo pool as it, the BFG 9000 uses 30 BFG Units per shot (max 60 for 2 shots). Identical to it's Doom 2016 counterpart, it is the weapon of choice for large crowds of enemies and bosses, although it consumes more ammo than the Unmaykr. It can kill most enemies (other than the Tyrant, the Doom Hunter and a few other Super Heavy Demons) in a single direct hit and leave any survivors with low health. In the boss fight against the Icon of Sin, one shot from the BFG instantly destroys one of his eight armor pieces or body parts. Strategies regarding BFG usage in the final boss fight can be found here.

The BFG 9000 is greyish-white with green neon around it, it has a Samuel Hayden-face-like Barrel, a black trigger and a triple sided front side. Running out of argent plasma causes the BFG to tilt down.

Upon being fired, it will make a whirring sound increasing in pitch until the projectile is shot out. When the projectile hits an enemy or wall, it will create a field of damage from its detonation point back to the player, killing or hurting any monsters in its path.

As with most other weapons in Doom Eternal, the BFG has several weapon skins available. 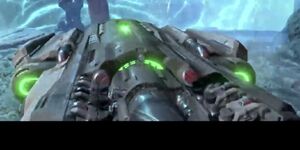 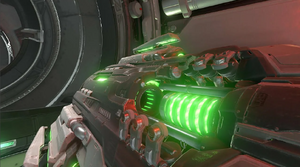