The BFG 9000 is a weapon in Doom. It is a massively powerful plasma energy weapon which utilizes ionised Argent Energy. Similar to the Chainsaw, it cannot be found on the weapon wheel, and is instead accessible through a dedicated button. By default, this button is "T" on the PC or pressing the topmost face button on a console controller ("Y" for Xbox One, "Triangle" for PS4, "X" for Nintendo Switch).

The BFG 9000 fires a green burst of plasma, damaging enemies near the projectile during flight and vaporising targets upon impact, as well as causing significant splash damage to enemies standing in the vicinity of the projectile's explosion. The damaging bolts do anywhere from 120 to 1 damage a shot at 100ms, doing 1200/1 dps. Because of the projectiles slow speed and large radius it will do major damage before the enemy leaves the area. A direct hit does 6000 damage. Thus, the BFG 9000 is the most powerful weapon in the game, as it is able to kill any non-boss creature in a single direct hit.

However, bosses can be stunned with one direct hit for a few seconds, which can be used to break up an attack. The weapon is very useful in dangerous situations or against a large group of powerful creatures.

Unlike most weapons, no modifications can be added to the BFG 9000, nor can any improvements be made. It also holds up to 3 shots, however there is an upgrade that can be made for enemies to have a small chance of dropping BFG ammo. If the player fully upgrades all weapons, the Praetor Suit, and has fully upgraded the health, armor, and ammo subsystems, a 4th shot for the BFG 9000 will be unlocked. It is unknown if this is true.

Ammo is rare but can be found as separate green pickups found throughout the level. Because of this, it is recommended to use this weapon as a last resort or against difficult enemies.

The BFG is one of the 3 power weapons available in Multiplayer, where it is an excellent way to kill demons or clear large areas of enemies. As with the Chainsaw and the Gauss Cannon, the Weapon Mod allows the user to see enemies through walls. The damage is 15/1 per bolt with 100ms, so it does 150/10 dps. A direct hit does 275 damage. 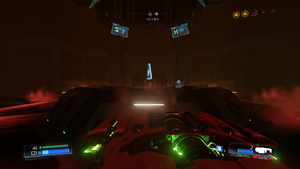 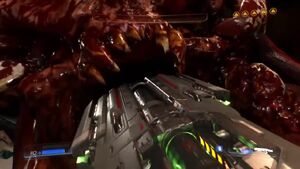 BFG 9000 being fired in the mouth of a Spider Demon. 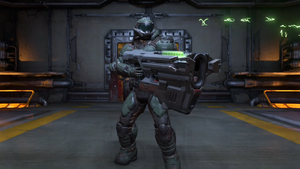 The Doom Slayer with the BFG9000 from third person view.
Add a photo to this gallery
Retrieved from "https://doom.fandom.com/wiki/BFG9000/Doom_(2016)?oldid=134225"
Community content is available under CC-BY-SA unless otherwise noted.