The BFG-10000 is a massive defensive weapon on the Phobos moon base in Doom Eternal.

Following the destruction of the Argent facility on Mars, the UAC Board of Directors issued the construction of the BFG-10000 to defend the company's monopoly on the red planet and its surrounding airspace. Based on technology derived from the BFG-9000, which was designed by Dr. Samuel Hayden, the BFG-10000 was the largest man-made weapon platform ever conceived, wielding enough firepower to defend against even the most sophisticated of capital-grade FTL cruisers in existence or against space-bound demonic threats.[1]

The BFG-10000 is powered and controlled by the BFG-9000, which is mounted inside the defense station's magnifying array; this allows the BFG to fire a series of reactive lensing rings, which pump a constant stream of gaseous Argent through the barrel, igniting in reaction to the electrified plasma, and producing a tremendous energy wave powerful enough to crack the surface of a planet.[2]

Non-cultist UAC personnel on Phobos used the BFG-10000 against a demonic attack. The Doom Slayer traveled to the Phobos facility to use the BFG-10000 to blow a hole into Mars in order to gain access to the ancient city of Hebeth located in Mars's core. Upon his arrival inside the weapon, the Slayer promptly pushed away the UAC Guard, who was controlling the BFG-10000 from the control pod, before taking control of the weapon and aiming at Mars. However, the Slayer is briefly prevented from firing the BFG due to the weapon system's safety mechanism until VEGA disabled it. Afterwards, the BFG-10000 is rendered unusable and the Slayer removed the BFG-9000 from the control pod and taking it for himself. 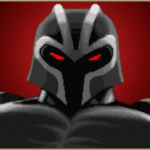