Atlans were enormous bipedal war machines used by the Night Sentinels in their war against the forces of Hell.[1] It was thought no fully-functional Atlan is known to have survived the demonic conquest of Argent D'Nur, though semi-functional examples can be found scattered across the shores of Hell.

Atlans are massive humanoid machines somewhat similar in overall design to the Praetor Suit, with a similar green color scheme. The main difference in shape is the head, which is more or less conformal to the shoulders rather than having a distinct neck, and has a pair of large horns reminiscent of a Viking helm. Their known weaponry consists of energy beams fired from the palms of their hands, enormous lances projecting red glowing blades similar to that of a Crucible, and a shoulder-mounted beam cannon. Compared to ARC's mechanized walkers, which are more of a fire support vehicle meant to directly support regular infantry soldiers, the Atlans are far larger and much more heavily-armed as they are purposely-designed to be able to both fight a Titan on equal footings and kill it easily.

In line with the Sentinel rejection of Argent Energy, the Atlans did not use it: they were powered exclusively by "Sentinel Energy," seemingly the untainted essence derived from the Wraiths prior to their imprisonment. This energy was supplied by a number of giant "Sentinel Power Cores" inserted into the machine at various key locations.

Atlans are found all across Argent D'Nur and Hell, often frozen in mid-duel with Titans which seemingly expired just as the machines ran out of power. According to the Ligra Sultagenta, their operators abandoned their machines after running them to their limits and fought on foot, but ultimately all but the Doom Slayer fell in the final battle.[2]

The Betrayer's Atlan stands in a lava flow in the area he has made his home. The disgraced former Night Sentinel defends himself with four detached Atlan shoulder cannons rigged to a network of laser tripwires.

The Fortress of Doom contains a limbless Atlan torso in what appears to be a service gantry on its lower level, presumably belonging to either the Doom Slayer himself or the previous owner of the station.

During the Siege of Immora, Commander Valen rallies the remaining free tribes of Argenta who muster numerous hover tanks, airships and several Atlans to fight the Titans once more. One can be seen shooting in the background, and one uses its spear to gore a Titan. Presumably later it engages another Titan, charging up what appears to be an Atlan-sized blood punch, as well as firing its cannon. It also uses its back thrusters to stabilize itself when the Titan tackles it.

An Atlan in a past battle with a Titan.

The partial Atlan in the Fortress of Doom.

Another Atlan that was battling a Titan.

An Atlan punching a Titan.

A severely damaged Atlan lies abandoned on the shores of Hell, a Titan posed in agony at the tip of its lance. 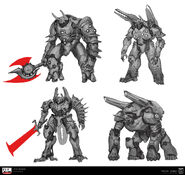