Argent D'Nur is the former homeworld of the people known as the Argenta or Sentinels. The realm has since been conquered and partially consumed by Hell.

Millions of years ago the planet of Argent D'Nur was dormant and lifeless until a massive crystal-like object known as the World Spear mysteriously arrived from the depths of space and crashed into the planet with enough force to pierce it from pole to pole. Soon after the impact, from the wound torn in the planet emerged angelic creatures known as the Wraiths, who spread across Argent D'Nur as their immense power, known in Argenta legends as the Wraithcall, seeded life to the planet, starting with a race of giants called the Ancestrals and then the first men.[1][2]

The Wraiths possessed powerful abilities which they granted to the Argenta, who saw these gifts as magic. Thus they formed a warrior society, led by kings who were required to lead their troops in battle to be regarded as worthy, with the Wraiths as their patron gods. The Night Sentinels served as their protectors, while the priests of the Order Deag would worship and venerate them.[1]

The Argenta would later encounter another race of powerful beings, the Maykrs. The Maykrs sent envoys to Argent D'Nur and offered to bring order to their world. The creatures offered not just strength or technology, but an eternal reward: those who served them would be granted an afterlife in the realm of Urdak, alongside their loved ones. This led to a powerful civilization which spread throughout the galaxy, conquering many worlds. While they still venerated the Wraiths, they came to regard the Maykrs as the true gods, particularly their leader, a being known as the Khan Maykr.[3][4]

Shortly after the arrival of the man who would one day be known as the Doom Slayer, forces from Hell attacked Argent D'Nur, emerging at the holy city of Taras Nabad, but thwarted, at great cost, by the might of the Night Sentinels.[5] The war with the demons led to the discovery of what was called the "Essence" or "Elixir," Argent Energy, by Argenta priests studying fallen demons, and while initially this was seen as a possible weakness that could be exploited, it soon proved more useful. Through the use of a formulation developed by the priests, strength, wisdom, and eternal life could be granted, as well as an incredible source of power for machines and weapons.[6] The Night Sentinels were among the few to reject this new marvel, seeing it as interfering with their traditions and suspecting a substance drawn from the enemy.[7]

As the war with Hell continued to rage, the Night Sentinels made a shocking discovery: Argenta slaves working in the bowels of Hell, raising vast towers that processed innocent souls into that same marvellous Elixir that had so benefited their society.[8] Their overtures to their people about this horrific discovery fell on deaf ears, and the Sentinels soon found themselves embattled with their disbelieving kin as a civil war erupted, the Sentinels loyal to the King and Wraiths on one side while many ordinary people and a number of traitor Sentinels sided with the Maykrs. Those traitor Sentinels who fell in battle were simply raised from the dead through Hell's power, a process that corrupted them into undead monsters known as Marauders.[9]

Unknown to the Night Sentinels, the priests of the Order Deag had also thrown in their lot with the Maykrs, and as the Sentinels enacted their plan to destroy the great soul-factories of Hell, they were twice betrayed: firstly by the priests, who scattered the Sentinels in their Atlans all across the surface of Hell and left them to their fate, and by one of their commanders, Valen, who was compelled by the torment of his son to grant the Order Deag access to the slumbering Wraiths. For this his name was cursed and he became known as "The Betrayer."[10]

Argent D'Nur fell to the forces of Hell that day, with many regions of the planet sucked directly into Hell's blasted lands and the Wraiths imprisoned in the Well. Of the Sentinels in Hell, the only survivor was the Slayer.[11]

In Doom Eternal, the non-consumed parts of Argent D'Nur show a rocky terrestrial planet with a climate similar to that of Earth. The locations visited in-game show a dramatic, craggy landscape with numerous mountains and rocky formations. The sky has a blue-green hue, sometimes lit by streaks of green lightning. The environment is dominated by conifer trees, grasses and mosses. Birds can sometimes be seen in the distance and the Doom Slayer encounters a "Sentinel Beast" in the form of a wolf, but otherwise the only signs of life are demonic. Corpses of Titans can be seen sprawled in some areas.

The planet possesses at least one moon. It appears very large in the sky, evidencing it is either bigger or closer to the planet than Earth's moon.

The "consumed" regions of Argent D'Nur have become heavily corrupted by Hell, with only structures and statues showing their origins. Demonic symbols have been added to many of these and their architecture warped or twisted.

A number of unconsumed cities have survived the fall of Agent D'Nur, watched over by Night Sentinels who have remained loyal to the undying spirit of King Novik or the Khan Maykr without being resurrected and corrupted by Hell like the Marauders. The holy city of Taras Nabad, once the political and spiritual heart of Argenta society, stands abandoned, while Sentinel Prime's famed arena where outlanders and criminals would honorably duel for the right to be join the armies of the Argenta has become a blood-sport arena where Deag Grav forces captives to duel demons for his own amusement.

While Taras Nabad was once the capital, it isn't the current seat of the King: the spirit of King Novik instead lingers in a fortress-city called Exultia.

A final city is mentioned in lore but never visited, the walled city of Illkana. This city was apparently defended against an attacking force for ten days by a battalion of Night Sentinel archers armed with Ballistae. Its fate following the fall of Argent D'Nur is unknown.

Some areas of Argent D'Nur were not so lucky and were forcefully pulled right into Hell itself: these include the Umbral Plains, formerly a desolate polar wasteland, and the area surrounding The Well. Another area, seemingly a complex of temples, was simply called "Argent D'Nur" by the UAC during their investigations on Mars, though this error in naming is most likely due to the scarce and fragmented information on this region that UAC managed to recover.[12]

Superficially, Argenta appear to be at a level of development mirroring the high medieval period of Earth's history, wearing suits of plate armor, operating hand-stoked forges and carrying swords. However, this appears to be more a product of deeply held tradition rather than primitiveness, and numerous references are made to the Argenta developing complex machines or making scientific breakthroughs without requiring the assistance of the Maykrs. Their technology is a combination of their own ingenuity, Wraith magic (called "Sentinel Energy") and Maykr technology, with later devices also using Argent Energy.

Their architecture mirrors Earth's Gothic period heavily, though at scales where magic or technology would be necessary to construct it. This is even reflected in the design of spacecraft like the Fortress of Doom, which is built to resemble an ancient castle.

While they do still wield what appear to be mundane swords, they more commonly arm themselves with polearms that project an energy blade when activated. For long-range work, their soldiers employ a weapon called the Ballista similar in performance to a state-of-the-art UAC Gauss Cannon.

They possess flying craft and, in battle, the Night Sentinels would often employ gargantuan bipedal war machines called Atlans, which were powered by Sentinel Energy and armed with powerful weapons. An Atlan was a match for even Hell's mighty Titans. They are even capable of space travel, although it's unknown if they achieved this prior to their covenant with the Maykrs. The Fortress of Doom is one such vessel. 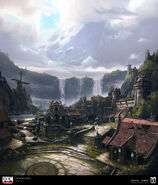