The Archvile is a returning monster that appears in the Doom Eternal, having made its debut in Doom II. Serving as a replacement for Doom (2016)'s Summoner, it is capable of spawning in a group of demons to harass the player and damaging them with various fire-based attacks.

Forged from Hellfire, the Archvile is feared among lesser demons for its innate ability to channel and manipulate the unholy powers of Hell magic. Descended from the eldest race of demons, the Archvile has long held a place within the ruling caste of high-born demon lords. Possessing superior intellect among the demon ranks, the Archvile's psychomancy powers make it a natural-born ruler of the savage and primitive beasts of Hell, capable of bending weak-minded underlings to serve its will.

The Archvile has a similar appearance to its original sprite in Doom 2, but several small tweaks have been made to its design. It is still extremely tall, towering above the player, as well as most other demons. However, it has also been noticeably beefed up, looking far less emaciated than its previous designs. A large number of spines can also be seen all around its body, and tough pieces of bone cover its frame, particularly on its shoulders and chest area.

The Archvile is a master of fire, with almost all of its attacks involving an attempt to burn the Slayer in some way. From medium distances, the Archvile will launch waves of fire at the Slayer, not dissimilar to the Whiplashes shockwaves. If the Slayer is in the Archvile's line of sight at longer distances, and the Archvile isn't in the middle of summoning a group of enemies, it may spawn a large puddle of flames underneath them. This lake of fire deals significant damage and should be dashed out of as fast as possible. Should the Slayer get too close, the Archvile will surround itself with fire and attempt to teleport away to a safer location.

The Archvile's greatest asset is its ability to summon a group of demons to attack the Slayer. While doing so, the Archvile will erect a wall of flame in front of it, preventing both projectiles and the Slayer himself from reaching it. Should the Archvile succeed in summoning in its demonic horde, they will have the same perks as if they were under the effect of a Buff Totem, with increased movement speed and damage output. This effect will only apply to demons the Archvile has summoned, however, and will end if Archvile is slain. An Archvile can theoretically summon an infinite amount of demons, though it will only spawn a few each time. It should be noted that the Archvile is incapable of summoning other Archvile's, though it can summon other Super Heavy demons such as Barons of Hell, Tyrants, and even Marauder's on higher difficulties.

As a Super Heavy Unit, the Archvile is immune to the Chainsaw and resistant to the BFG projectile's tendrils.

Due to its high health pool, damage output, and capability to overwhelm the player with buffed up demons, killing the Archvile should be your number one priority at all times. The Archvile will typically spawn in an obscure location on the battlefield, and teleports frequently, making keeping track of it challenging. Should the player find it, getting up close to bypass its defenses and forcing it to use its weaker attacks is highly recommended. The Super Shotguns Meathook is capable of quickly closing the distance and dealing hefty amounts of damage. The Lock-On modification for the Rocket Launcher is also recommended, capable of tracking the Archvile, even after a teleport, and taking out a large chunk of its health.

The Archvile also serves as one of the several playable demons in Doom Eternal's Battlemode. With a base health of 2250, it specializes in area denial and support, capable of erecting walls of fire to block the Slayer and using teleportation to make up for its lackluster movement speed.

Archvile Specific End of Round Upgrades 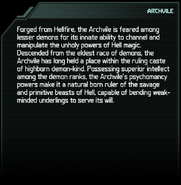 The Archvile performing its signature pose, surrounded by a lake of fire.

Add a photo to this gallery
Retrieved from "https://doom.fandom.com/wiki/Arch-vile/Doom_Eternal?oldid=133303"
Community content is available under CC-BY-SA unless otherwise noted.