< Arachnotron
View source
watch 02:46
The Quarry - The Loop
Do you like this video?
Play Sound
Sub-Pages:

The Arachnotron makes a return in Doom Eternal. While still resembling its design from Doom 64, it has undergone several notable design changes to both its appearance and combat capabilities.

Arachnotrons are built with genetic material recovered from the remains of the original Spider Mastermind, bio-engineered for cyber-augmentation. While its actual body exhibits only limited mobility, the oddly cerebral qualities of the Arachnotron make it a prime candidate for the impulse-controlled prosthetic frame that it now permanently inhabits. The UAC facility responsible for the Arachnotron's creation, intended to engineer and weaponize demons of its own design, was overrun after an outbreak occurred at its assembly plant, killing everyone inside. The facility, still operating under the directive of the administrative AI, continues to manufacture Arachnotrons autonomously.

The design is fairly similar to its original depiction in Doom 64, a demonic brain on large mechanized legs. However, its turret has been moved from its underbelly to the rear of its body. Its legs have also been made much larger, and the body has become more narrow. Both sides of its brain also feature several launch ports from which it shoots its grenades.

The Arachnotron's rear-mounted turret is capable of targeting the Slayer from extreme ranges and can deal extensive damage in a short period of time. From medium to close distances, it may also use its grenade launchers, firing bouncing balls of energy that explode after a brief time. When right next to the player, the Arachnotron will swipe at them with one of its legs.

The Arachnotron's most deadly weapon is its turret, capable of shredding an unprepared player's armor and health in moments, thus disabling it should be the player's top priority. The Combat Shotgun's Sticky Bomb is useful for removing it from close ranges, but the Heavy Cannon's Scoped attachment is preferable for removing it from further than medium distances.

Once its turret has been destroyed, the Arachnotron will be forced to close the gap between itself and the Slayer, relegated to using its grenades and swiping attacks. However, its grenades are still capable of dishing out serious damage, especially in more enclosed spaces where there is little room to maneuver. Using rapidly firing weapons such as the Full Auto Combat Shotgun modification and the Heavy Cannon's Micro Missiles are able to put it out of action quickly, allowing the player to focus on other threats. 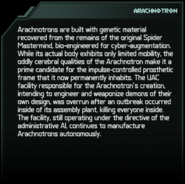 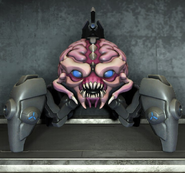